REVIEW: Profile of a Killer 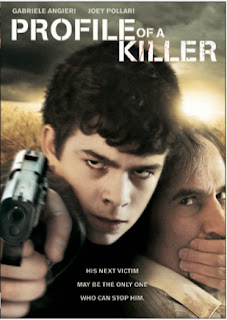 "Profile of a Killer" opens with a chilly winter landscape and a random bloody skull (one of many skeletal remnants littered throughout) stuck in the snow. It's a bleak opening, emblematic of the type of movie to come. As its title suggests, the film is a psychological thriller that seeks to understand the motives of a serial killer. It turns out that the killer is merely a teenager but as the opening suggests, this is far from child's play.

I start off with the opening scene because it represents the crux of the film's various strengths and weaknesses. Namely, the film has some potent sinister undertones, but there's also an emotional coldness that limits some of its impact. It's a striking opener, but it seems ineffective in hindsight.

Soon after this establishing shot, we get right into the middle of the investigation with FBI agents Saul (Gabriele Angieri) and Rachael (Emily Fradenburgh). Their case quickly gets complicated though, as Saul is taken hostage by David (Joey Pollari) and forced to play a deadly game of "figure me out". Much of the film is dedicated to this psychological tug of war and it's indeed the film's most compelling aspect. You'll find yourself mentally conducting your own analysis of this mysterious young man. Clearly, Pollari is the film's MVP, bringing some interesting dimensions to this character. His smug nonchalance is very fascinating, slyly subverting the expectations of his boyish appearance. Angieri certainly holds his own as well, projecting a steadfast determination that keeps the film grounded. It's this dynamic that keeps you watching.

On the other hand, Fradenburgh struggles with her own parallel storyline. Rachael's job is basically to find this killer and save her colleague. It's familiar territory and thus devolves into your standard procedural that doesn't add much excitement. Again, this relates back to the opening. It sacrifices some much needed character depth, especially with Rachael. To compound this further, her performance is unable to compensate for the lack of an emotional connection. She gets some key dramatic moments but she downplays them to a fault, unfortunately robbing the film of much of its urgency and dread. Despite this, the screenplay is compelling enough to keep you invested. That investment is challenged by a slightly elusive ending though, leaving you expecting more.

Overall, "Profile of a Killer" is a commendable film that just feels a little incomplete. It certainly could have used some better character development and a more satisfying narrative arc in general. As a result, the film feels like a middle section of a miniseries. That may sound like a slight on the filmmaking but I assure you, if this was part of a miniseries then it would definitely encourage me to continue watching.
Shane Slater at 7:46 AM