MOVIE OF THE WEEK: This Is The End 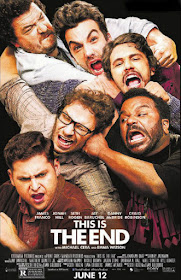 This week’s top pick is one of my few re-watches this year – “This Is The End”. My initial viewing was far from ideal (noisy audience and bad audio), so I felt that a revisit was in order before I could honestly rate and review it. I’m happy to report that film held up very well.
The plot surrounds an alternate reality where the apocalypse has come and affects actual people that we know. The sprawling cast includes many famous celebrities but mainly focuses on James Franco, Jonah Hill, Seth Roger, Jay Baruchel, Craig Robinson and Danny McBride. They have been brought together by a party at James Franco's house and end up being stranded there, due to the doomsday destruction outside. As we watch them struggling to survive, it's a cinematic feast of some of the finest comedic actors in the business. Hill is particularly effective in his role, as he seems to have taken the extra step to develop a unique character, rather than just relying on his pre-established persona. Everyone is very funny though (including the cameo appearances by Emma Watson and Michael Cera etc.), so it really is a laugh riot from start to finish.
Despite its obvious comedic intentions, the film also has a few sentimental elements that are brilliantly woven into the story. Even as the plot meanders throughout, there's a great throughline involving Baruchel and Rogen for example. As they explore the meaning of their friendship, it sets up an awesome finale. Honestly, it’s this finale that cements the film as one of the strongest of this year’s comedies. It uses blatantly manipulative pathos followed by a seemingly random (albeit hilarious) final scene and you can't help but give in to its audacity.
"This Is The End" may seem like your standard raunchy comedy and at times it does feel that way. There are definitely some lazy visual gags that seemed straight out of a "Scary Movie" film (think gay rape by a large demon phallus) and seemed entirely unnecessary. For the most part however, the film delivers on its promise of baudy hilarity. In summary, the personalities may be familiar but the humour is often truly inspired.
Shane Slater at 8:06 PM