OSCAR WATCH: A Star Is Born 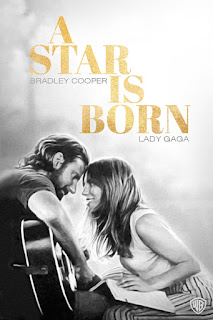 There are few stories in cinema as dramatically compelling as the simultaneous rise and fall narrative of "A Star is Born". Initially produced in 1937, the film was remade in 1954 (featuring one of the greatest acting performances of all time) and then again in 1976 with Barbra Streisand as its titular star. All three versions have cumulatively built an undeniable legacy based on their artistry and/or cultural impact, touching the hearts of audiences - myself included - for generations.

With such a storied history, you should therefore forgive me for my initial apprehension towards the latest remake. This 2018 iteration of "A Star is Born" sees Bradley Cooper directing himself as the tragic Jackson Maine, a country music star suffering from alcoholism who falls in love with an unassuming singer-songwriter (Ally, played by Lady Gaga) and takes her under his wing. As their relationship develops, Ally becomes a pop star in her own right, while Maine's vices send him on a downward spiral. Through it all, they try to support each other the best they can. But as Judy Garland conveyed in 1954, love isn't enough.

Helmed by a first-time director (Bradley Cooper) and a singer (Lady Gaga) in her first lead role in a film. It all seemed so ill-advised to me. But then, the film premiered to rave reviews at the Venice Film Festival and the buzz kept building from there. Immediately, it generated Oscar buzz as the presumed Best Picture frontrunner. Some even suggested to it would be this generations' "Titanic".

It was with these astronomic expectations that I watched "A Star Is Born". And by no fault of the film itself, it therefore felt a little disappointing. The film is more modest than the showstopper the reviews would suggest, especially when the screenplay is so familar (albeit still very satisfying).

But that understated quality is one of its best attributes, particularly when it came to the performances and direction. Indeed, the highlights of the film turned out to be the elements I was most concerned about (the aforementioned Cooper as director and Lady Gaga in the lead). Cooper's execution of this melodrama is truly impressive, earning his deserved Best Director buzz by deftly balancing the intimacy of the relationship with the spectacle of the musical performances. Meanwhile, Lady Gaga will surely be a popular Best Actress contender with her moving performance, which has an unpolished authenticity to it. Best Supporting Actor contender Sam Elliott also deserves kudos for a stealthily brilliant performance as Jackson Maine's concerned brother.

Indeed, both her and Bradley Cooper (a lock for a Best Actor nomination) have a dynamism to their performances which elevate the film. Particularly as they make and perform the film's amazing music. In many ways, the film's romanticism transcends its central love story to become a love letter to pop music. Through both Cooper and Lady Gaga's characters, the film acts as a tribute to pop stars old and new, as their struggles and artistry are reminiscent of Whitney Houston, Taylor Swift and Lady Gaga herself. And the film's deeply affecting narrative and soundtrack - "Shallow" will be a Best Original Song nominee, along with nods for Best Sound Mixing and Best Sound Editing - reminds us of pop music's healing power, however fleeting it may be. It's a category of music that brings people together like no other and touches our heart and soul, resulting in phenomena like the Beyhive, the Little Monsters and This Party Is Killing You. I can hardly think of another film that so effectively captures the contemporary allure of pop music and the inevitable pressures afflicting musicians caught up in its whirlwind. As they say, Bradley Cooper and co. did it for the culture.
Shane Slater at 7:12 AM