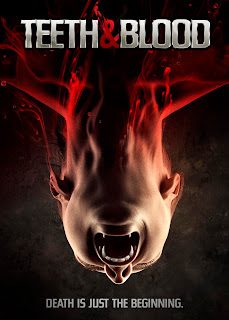 A pair of fresh voices on the indie scene has arrived with the new horror film "Teeth and Blood". This debut narrative feature is co-directed by Al Franklin and Pamela J. Richardson, who previously worked together on the documentary "Gold Diggin': For Love of Money". As you can surmise from the title, this production sees them exploring the world of vampires.

The events of the film take place around a film shoot, after a diva actress is murdered and her body vanishes. Production on the film is halted only briefly however, as the director soon seeks out a replacement. In step undercover detectives Mike Hung and Sasha Colfax, who are brought in to investigate the case. Colfax manages to land the deceased actress' role, while Hung takes up a job as a grip on the set. Things get even more mysterious however, as the city's supply of donated blood is begins to run low. Something's not right about this movie and its crew, but will our detectives figure it out before it's too late?

As this race against the clock ensues, the film juggles its horror elements and typical crime drama procedural to middling effect. Apart from some frightening special effects work on the vampires, genuine scares are rare. Horror films are prone to veer into camp without the right attention to detail and it seems like the low budget was a constraint on this production. It's a case where the visual design (art direction and cinematography) struggles to convey the requisite sense of dread and fear.

The film does fare better as a murder mystery, though only marginally. Sean Christopher and Michelle Van Der Water are well-matched as the detectives, but the screenplay fails to harness the potential of this dynamic duo. In general, all the characters are bit too broadly sketched for my liking.

Yet what it lacks in atmosphere and character development, it compensates for in - for lack of a better word - swagger. Unlike most other horror films (or mainstream films in general), this urban-set tale features a predominantly black cast. Rather than being relegated to minor supporting roles, these actors are given the chance to play the main protagonists and villains. In doing so, the colorful characters bring a unique flavor to the horror genre. Notably, Van Der Water fierce confidence and sensuality is reminiscent of Sharon Leal, while King Kedar amuses as an outlandish pimp who's aptly named Ghetto Vampire. This fresh approach is a welcome change which is enough to make the film worth your time. "Teeth and Blood" probably won't be giving you any nightmares but it offers a vital new perspective.