MOVIE OF THE WEEK: The Way He Looks 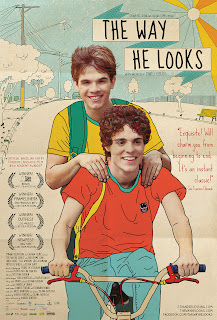 When Logan Lerman says to Ezra Miller "I didn't think anyone noticed me" in Stephen Chbosky's 2012 film "The Perks of Being A Wallflower", he tapped into a pervading sentiment of high school life. For many in that cliquish environment, being "invisible" is just as bad as being disliked. In Daniel Ribeiro's own take on the coming-of-age drama "The Way He Looks", this predicament gets a fascinating reversal. What if everyone noticed you, but you literally can't see them?

That's the unfortunate situation that Leonardo (Ghilherme Lobo) finds himself in. Blind since birth, his high school experience is very different from everyone else. Of course, that doesn't prevent the bullies from teasing him or the peer pressure of having a love life. Indeed, despite being set in Brazil, this high school is interchangeable with your typical North American setting. Thankfully, Leo has the support of his best friend Giovana (Tess Amorim). They spend practically every day together, hanging out and confiding in each other. They're absolutely inseparable. That is, until a new student named Gabriel (Fabio Audi) enters the picture. A handsome and friendly young man, the duo instantly take a liking to him and they all form a bond. When a school assignment pairs Gabriel and Leo together however, the boys end up spending more time together without Giovana. Feeling scorned, she also starts to distance herself from Leo. All the while, Leo doesn't fully realize the extent of her frustrations, as he's too busy enjoying Gabriel's company. As their friendship strengthens, Leo soon comes to realize that he may like Gabriel as more than just a friend.

The romance that eventually blossoms is a fascinating one, as both parties are uncertain as to how to approach it. One of the film's many strengths is how it honestly shows the difficulty in establishing a relationship with a blind person. The film's central relationship isn't a serendipitous movie romance. As the film shows, it's a unique situation that requires major adapting, even with the best intentions (as is the case with Gabriel). The script illuminates how visually-oriented our lives are, especially for young people. It really hits you when Gabriel embarrassingly asks "Have you seen that youtube video?" or "Wanna go to the movies?". It also poses some interesting questions about the complex nature of sexuality, especially when it comes to blind persons. How do you define someone's sexuality when you take physical attraction out of the equation? As Ribeiro engages with these ideas, he ensures that Gabriel's blindness isn't a gimmick, but rather a thought-provoking insight into blind life.

Yet underneath it all, Leo is really just your average teenager. Many of the film's key dramatic moments are framed around his desire to study abroad. The decision is a cause for concern for his seemingly overprotective mother, bringing out his rebellious attitude. As such, you're bound to see some of yourself in Leo as he tries to assert his independence and explore his own maturity (through alcohol, relationships etc.). This creates a relatability in the characters that not only enhances the viewer's experience, it also frees up our young stars to deliver some lovely intuitive performances. Despite not being blind in real life, Ghilherme Lobo is especially effective in the lead role. He manages to convey an impressive range of expressions with his eyebrows in lieu of his eyes, all the more remarkable for a debut performance.

With its endearing characters and heartfelt script, "The Way He Looks" is one of the most tender films you'll see all year. Some may dismiss it as being "slight" but for me, the film hits a genuine sweet spot. If you're a fan of films like "The Perks of Being A Wallflower", then I think you'd appreciate this one.
Shane Slater at 9:42 PM