HIT ME WITH YOUR BEST SHOT: Dog Day Afternoon 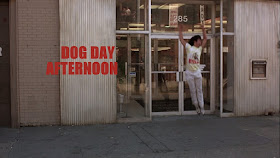 Here we are at the season finale of Hit me with your best shot and it really does make me sad. It has been another great season and I will surely miss these Wednesday night blogathons. For this final episode we looked at Dog Day Afternoon. I was initially a bit perplexed when Nathaniel announced this choice, as the film is known more for its awesome screenplay rather than its memorable visuals. I relished the challenge though, as these sort of films have inspired some of the most fascinating articles in this series. Surprisingly I ended up with lots of shots to choose from, as the shenanigans of the plot really deliver some good stuff to work with. 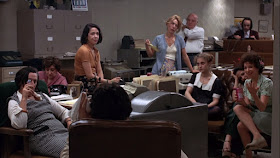 My favourite shot comes late in the game, as the bank robbery approaches its conclusion. To me, this image encompasses so much of the story. Apart from its perfect screenplay, this film soars on its acting performances. Screenwriter Frank Pierson really crafted some plum roles for the entire cast. In a normal bank robbery, the atmosphere is one of fear and terror. Not this one though, as Sonny (Al Pacino) and Sal (John Cazale) create quite a relaxed environment for their hostages. In fact, the primary concern of all involved is the unbearable heat, due to the malfunctioning of the air conditioning. As you can see in the shot, everyone looks haggard and is trying to cool off.

At the center of the image is Sonny, gathering with the girls for a little chit chat. It's interesting to realize throughout that Sonny is actually a pretty smart guy. He becomes foolish though, as he conceives a silly plan to escape via plane to an exotic location. In this scene, he is discussing potential destinations while they wait for travel arrangements to be made.

To the right of the shot we have Miriam (Marcia Jean Kurtz), a real trooper who is always smiling. She isn't fazed by the situation whatsoever and in fact has used the day to practice her dancing with Maria and learn some gun twirling tricks from Sonny. Even in a very testy situation at the end of the film, she is grinning from ear-to-ear having a jolly good time.

Another interesting character in this shot is Jenny (Carol Kane). She sits there exhausted, staring into the distance (maybe looking at a clock?) wondering when she will be able to go home to dinner with her husband. She senses no danger to her life and just wants to get this over with. Although I have immense love for this film, I can understand if some people find it too long. Like Jenny, the audience is anxious to see the inevitable outcome of this event. Sonny is in denial, but everyone else knows that this will not end well for the duo.

Finally, I'm amused by Sal at the back, distraught and concerned that the news channels have declared him a homosexual. When the film reveals its big twist earlier on, it comes as a big surprise and really addresses the misconceptions surrounding the expected gay archetype. I feel like this film is a relevant and important one in the canon of LGBT cinema. Even Leon (a man preparing for a sex change) isn't portrayed as flamboyantly as you would expect. As evidenced by Sal's despair however, this lifestyle was still largely frowned upon by general society.

Al Pacino gives a tour de force performance in the lead role, but the supporting players are all quite interesting too. Major kudos to all involved in this film.
Shane Slater at 3:00 PM