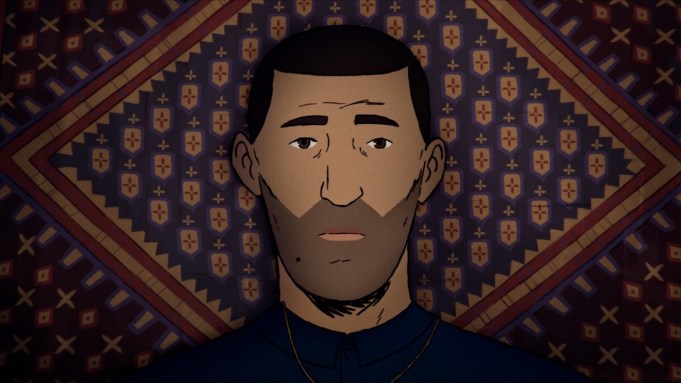 It's always a treat to find a film that defies easy categorization within rigid lines of genre, country and style. You've probably heard the incorrect assumptions that animation is for kids, subtitled films are hard to follow and documentaries should be plainly informative. But Jonas Poher Rasmussen's deftly dismisses these claims with "Flee", an animated Danish documentary about an Afghan refugee. A heartrending odyssey of epic proportions, this innovative film is truly one of the highlights of 2021.

The film's transcontinental journey begins in Afghanistan, where our narrator (using the alias Amin Nawabi to protect his identity) is growing up with his loving family of two parents, a brother and a sister. That family unit is soon broken apart, however, when his father is taken away by the Mujahideen during the Afghan Civil War. As the country becomes further embroiled in conflict and places the entire family in danger, they join the many others who are forced to become refugees. Thus begins a tumultuous life across several European countries as the family braves the world of human trafficking and unwelcoming immigration policies to find a new place to call home.

A sense of both personal and national histories unfolds as Nawabi recounts the awe-inspiring experiences which led to his present day life as an academic in Denmark. From the tense moments of social upheaval, to the subsequent treacherous voyages across land and sea, the scale of this journey is astounding. And as Rasmussen utilizes diversified animation styles and live action news footage from the time period, the film brilliantly illustrates the nuances of personal and collective memory. While some scenes use a more impressionistic approach with ill-defined lines and shapes, the constrasting archival footage and more fully sketched images intrinsically show how painful recollections of the past can be alternately unforgettable or hazy (intentionally or not).

Indeed, "Flee" is ultimately about the struggle to reclaim your past. As Nawabi reveals how he was forced to relinquish parts of his identity to survive, there's a palpable sense of relief in his voice. And as he forges his new identity, this already impactful story becomes even more complex through his own struggles with homosexuality. As he reflects on this aspect of his life - his amusing childhood infatuation with Jean-Clade Van Damme, his self-imposed torture about coming out - it builds to a cathartic climax to an already powerful life story conveyed with stunning artistry, visceral truth and sociopolitical resonance.