And the Oscar goes to... Parasite! 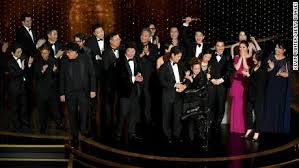 History has been made! At the end of an incredible Oscar ceremony, it was Bong Joon-ho's "Parasite" which took home Best Picture, thereby becoming the first non-English language film to win the Academy's top honors. The win capped a remarkable night for Bong Joon-ho, who also won for Best Director and Best Original Screenplay, while the film expectedly took home the trophy for Best International Feature. Elsewhere, the awards were largely predictable, as Joaquin Phoenix, Renee Zellweger, Brad Pitt and Laura Dern scooped up the 4 acting prizes. While their categories reflected a worrying dismissal of actors of color in 2019, the Academy almost redeemed themselves with their celebration of "Parasite" and by extension, Asian and world cinema. It remains to be seen whether this will actually turn out to be a watershed moment for non-English language films, but it's a very promising start. Here are your Oscar winners for the year 2019:

BEST SUPPORTING ACTOR
Brad Pitt – Once Upon a Time… in Hollywood

BEST PRODUCTION DESIGN
Barbara Ling, Nancy Haigh – Once Upon a Time… in Hollywood