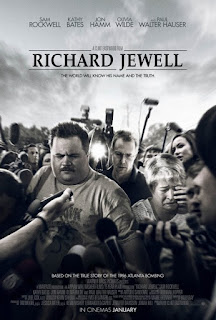 Throughout the history of cinema, there has been no shortage of narratives surrounding heroes. Often played by handsome movie stars, we've come to expect a certain type of heroic figure. That trend is intriguingly bucked in Clint Eastwood's typically late-breaking Best Picture contender "Richard Jewell", however, telling the true story of a decidedly average man.

The events of "Richard Jewell" take place in 1996 Atlanta, when all eyes are on the city as it hosts the Olympic Games. As the related activities get underway, Richard Jewell - an security guard and aspiring police officer - is assigned to watch over one such event. Always enthusiastic, he painstakingly patrols the area, looking out for anything suspicious. During his investigations, he stumbles on an abandoned bag and alerts the authorities. When this bag turns out to be a bomb, Richard Jewell steps in to protect the attendees from harm. After the bomb goes off without causing catastrophic fatalities, Jewell is declared a hero. But the FBI investigation soon turns towards Jewell himself, as his past behavior brings his motives into question.

The question of Jewell's guilt, however, is never in question for the audience. From the first moment we meet the character, Clint Eastwood makes it clear that he is a genuinely good guy. Indeed, his introductory scene sees him leaving candy for his superior (played by Sam Rockwell) at his early job, addressing him with utmost politeness. And as we get to learn more about the character, he becomes almost saintlike in his selfless kindness.

Unfortunately, Jewell's goodness makes for rather unremarkable storytelling, as the investigation lacks any bombshells or plot twists to plant seeds of doubt or tensions. Furthermore, the media frenzy personified by Olivia Wilde's unscrupulous journalist character is portrayed in crass, broad strokes. And like many recent Clint Eastwood films, the film's visual language is hampered by the dull color palette of the cinematography.

Yet despite it falls, "Richard Jewell" remains engaging thanks to the unique appeal of its central performance. Playing a character that could have been annoyingly nice and compliant in the face of injustice, Paul Walter Hauser manages to completely sell the character's sincerity and naivety. In addition, Kathy Bates is naturally sympathetic as a loving mother trying protect her son. Oscar nods for Best Actor and Best Supporting Actress are definitely possibilities for them both.

Ultimately, what "Richard Jewell" lacks in nuance and complexity, it makes up for in admirable symbolism of its titular character. It brings to mind Michelle Obama's memorable phrase "When they go low, we go high." Sometimes the most inspiring heroes are the ones who simply choose to be kind, even towards their enemies.