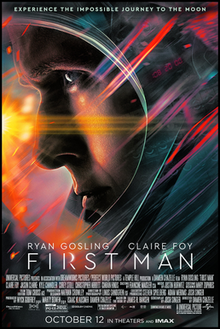 For years, one of the most popular dreams for young boys and girls was to be an astronaut when they grow up. Whether they were American, South African, Japanese or Australian, space exploration had captured children's imaginations all over the world. This widespread ambition is no coincidence however. It is a testament to the efforts of NASA and one astronaut in particular - Neil Amstrong. Known to be the first man to walk on the moon, his accomplishment was televised in front of more than 500 million viewers in 1969. Now, nearly 50 years later, audiences can relive his journey through Damien Chazelle's incredible new film "First Man", based on Armstrong's official biography "First Man: The Life of Neil A. Armstrong".

"First Man" beings in 1961, when Neil Armstrong (Ryan Gosling) underwent his first test flights at NASA. It is a tumultuous time both personally and professionally for Armstrong, as his young daughter Karen is suffering from a brain tumor and his flights have been largely unsuccessful. When Karen dies shortly after and Armstrong is temporarily grounded, he finds himself at his lowest point. But when an opportunity arises for him to be a part of the groundbreaking Project Gemini, Armstrong gets a new lease on life. He proceeds on a rigorous training program leading up to what will eventually be the historic Apollo 11 mission. But the fatally high risks and expenditure behind the Space Race draws concern from the tax-paying public and families of the astronauts. Armstrong is determined to make it to the moon, however, committing himself to one of the most daring feats ever attempted by the human race.

Through his musically-themed work in his first three films, Damien Chazelle has established himself as one of Hollywood's greatest showmen. But despite the high-flying premise of "First Man", Chazelle surprisingly brings the traditional space adventure down to earth. Largely taking the form of a biopic rather than a thriller, Chazelle shows ingenious directorial instincts in the film's audiovisual language. The atypical cinematography comprises mostly of closeups and two shots, making the audience feel immersed in Armstrong's headspace and immediate perspective. Meanwhile the impactful sound effects and gradual crescendo of Justin Hurwitz' score make for a riveting experience.

Ultimately, the biggest triumph of "First Man" is not its awe-inspiring mission - though that is certainly a captivating highlight - but for its touching examination of the man in the spacesuit. As if inspired by his ambitious protagonist, the film's poignancy and resonance signifies the next step up for Damien Chazelle as filmmaker. And just like Armstrong inspired generations of youth to be astronauts, so too will Chazelle's body of work influence the next generation of filmmakers. I'm looking forward to wherever he goes next.
Shane Slater at 10:09 AM