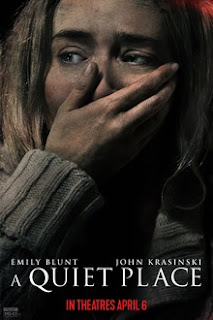 Over a century ago, cinema as we know it began with silent films, which laid the foundation for many of the common techniques used by filmmakers today. Despite the lack of audible dialogue, those early pioneers were able to capture the imagination of audiences and tell unforgettable stories. Fast forward to the 21st century and populist cinema has adopted a more noisy, talky approach. It's for this reason that John Krasinski's exceptional "A Quiet Place" stands out so noticeably in today's marketplace. Indeed, few words are audibly spoken throughout this nerve-wracking sophomore feature. But Krasinski proves to be highly fluent in another language - the powerful audiovisual language of horror cinema.

"A Quiet Place" is set in the near future in 2020, a time when most the world's human population has been decimated by mysterious deadly creatures. Those who remain are constantly living on a knife's edge, as they must remain quiet at all times to avoid detection by these creatures who use their hypersensitive hearing to track down their victims. Among the survivors is the Abbott Family - husband Lee (John Krasinski), wife Evelyn (Emily Blunt), sons Marcus (Noah Jupe) and Beau (Cade Woodward), and deaf daughter Regan (Millicent Simmonds) - who struggle to survive while they seek to learn how to stop these monsters before it's too late.

From this intriguingly original premise, Krasinski crafts one of the most effective horror films ever made. Thanks to the unbearably tense silence, every jump scare is twice as startling and every creepy sound sends a chill down your spine. And like any good monster flick, the creature design is absolutely terrifying to behold. The film is so scary that it will make you want to run screaming for the doors.

But although you'll want to call on Jesus to save you from this nightmarish experience, you'll still be willfully glued to your seat. What elevates this horror story is its potent human element, thanks to a deeply affecting emotional throughline and a compelling rooting factor for the characters. Doing double duty, Krasinski is just a proficient in front of the camera as the family's heroic father, further displaying his newfound leading man appeal. By his side, Emily Blunt is as expressive as ever in a role that calls on her considerable skills as an actress. As wife, mother and vulnerable, she is at once warm, formidable and tender. But perhaps the most significant performance in the film comes from Millicent Simmonds. Following her debut performance in "Wonderstruck", she continues to be a shining example of the endless capabilities of deaf actors, giving the film an empathetic perspective of adolescent angst.

As with many horror movies, the plot relies on a few bad decisions from these characters to move the plot along and set up the dangerous scenarios. But when a film is this well made, these minor contrivances are easily forgiven. Thanks to Krasinski's masterful use of image and sound, Oscar nominations for Best Picture and Best Director are certainly within the realm of possibility. And in my opinion, they'd be well deserved. "A Quiet Place" is one of the most enthralling theatrical experiences I've had in recent memory and easily my favourite film of 2018 so far.
Shane Slater at 9:10 AM