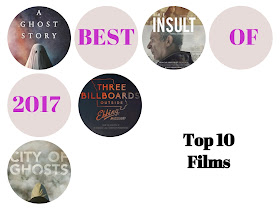 Throughout the course of 2017, it seemed like cinema had a point to prove. As the industry struggles to stay relevant to society, many of the year's most prominent films aimed to capture the zeitgeist and assert their importance. From empowering blockbusters like "Wonder Woman" to the racial tensions underlying films like "Get Out", the word "timely" frequently came up in discussions of the year's releases.

As film critics we often like to pretend we're immune to prioritizing the perceived "importance" over the artistry. But the truth remains that art and politics will always be intertwined. My own Top 10 list reflects this, as the films seemed to be in conversation with each other, despite the varied genres and styles they represent. On reflection, it became clear that the intolerance associated with the Trump era was a issue that resonated with me, whether it be through allegorical ("War for the Planet of the Apes") or more literal ("In the Fade") means. Meanwhile, some of my other favorites ("Call Me by Your Name") were more "timeless" than "timely", reflecting filmmaking in all its glorious beauty.

Indeed, at the end of the year, I felt nothing but appreciation for an outstanding year of cinema. Here are the 10 films I loved the most, including excerpts from my reviews:

9. The Other Side of Hope
(directed by Aki Kaurismäki)

"Kaurismäki is soberingly blunt in exposing the hypocrisy of European liberalism."

8. In the Fade
(directed by Fatih Akin)

7. The Insult
(directed by Ziad Doueiri)

"A powerful reminder of the damaging effects of bigotry, prejudice and even more universally, fragile masculinity."

6. War for the Planet of the Apes
(directed by Matt Reeves)

"As fresh and visionary as the brilliant 1968 original."

"Two years after examining the violence of the Mexican drug trade in “Cartel Land,” Matthew Heineman is back with another bracingly intimate account of an ongoing state of terror."

4. The Square
(directed by Ruben Östlund)

"This masterful film becomes not just a satire of the modern art world, but of life itself and its endless absurdities."

"McLeary’s camera gets up close and personal to an almost overwhelming extent."

1. Call Me by Your Name
(directed by Luca Guadagnino)

"Filled with moments of pure bliss, this deeply touching film is a romance for the ages."