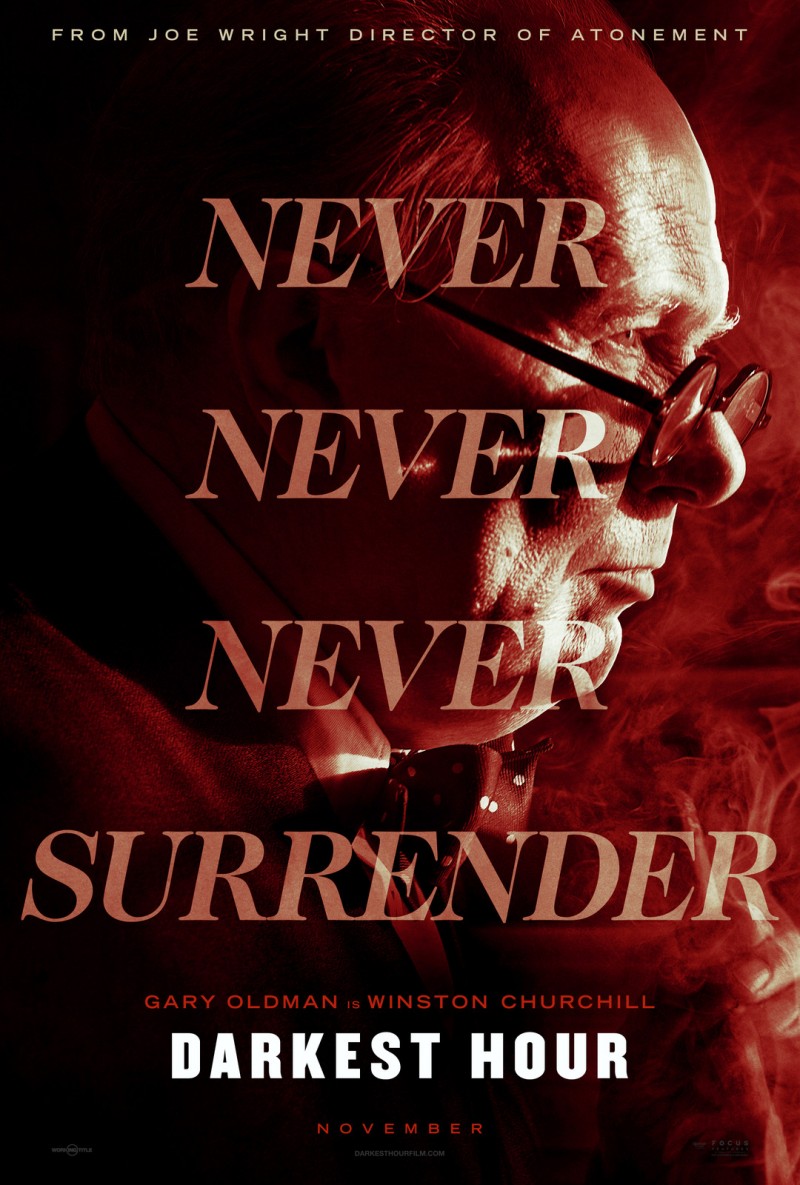 When Joe Wright's "Darkest Hour" was announced, it immediately became one of the most anticipated films of 2017. Boasting Oscar-nominated actors and craftsmen and a premise centered on of the most important figures of the 20th century, it promised a handsome, crowd-pleasing production. And whether you consider this a good or bad thing, that's exactly what this Best Picture contender delivers.

The aforementioned important figure at the heart of the film is none other than Winston Churchill (Gary Oldman), the revered statesmen who lead Britain through one of the darkest periods in its history. Focusing on critical events at the height of World War II, the film follows his controversial selection as prime minister through the tumultuous days to come, when life or death decisions needed to be made. As the German army exerted their might, Churchill was urged to pursue a peace treaty with the tyrannical Hitler. But he refused to back down, standing firm against the advice of his war cabinet, executing one of the riskiest and bravest political maneuvers in world history.

Taking place away from the battlefield in the hallowed halls of parliament and behind closed doors, "Darkest Hour" is an atypical war movie. It therefore requires a special filmmaker to elevate a film about a series of meetings and make it dynamic and cinematic. Thankfully, Joe Wright was up to the task. Through his still nascent career, he has shown a knack for kinetic filmmaking, whether it's the high-flying adventures of Pan, the rhythmic musicality of "Anna Karenina" or "Atonement", where he previously visited the Dunkirk crisis with an iconic tracking shot. Admittedly, he is notably constricted this time around due to the more sedentary nature of the situation. But he still manages to find a groove largely through oratory fireworks, as words become the most agitating force in the film. As one parliamentarian puts it, Churchill "mobilized the English lanuage."

Charged with delivering these words, Gary Oldman's role is a herculean task of its own. Though Churchill impersonations have become an awards magnet of late, it's also a thankless role in some ways, requiring a level of showiness that is frowned upon in modern criticism. But Oldman brings a fortuitous combination of movie star charisma and character actor peculiarities that impressively avoids caricature under his obvious Oscar-baiting Makeup and Hairstyling. And when he delivers Churchill's famous speeches, he does so with rousing gusto. Indeed, it's the equivalent of a mic drop aimed at the Best Actor race.

Oldman's performance is undeniably the main reason to see this film. But the overall filmmaking is much better than it has thus far been given credit for. Bruno Delbonnel for example, would make a respectable Oscar nominee for Best Cinematography. The way he uses lighting to convey how Churchill steps in and out of the spotlight is highly effective. Meanwhile, Dario Marianelli's reliably melodious Original Score also merits Oscar consideration. Perhaps most surprisingly, the script is liberally sprinkled with humor, which significantly enlivens the film. Furthermore, screenwriter Anthony McCarten was previously nominated for "The Theory of Everything" and I think he could be in the running again, this time for Best Original Screenplay.

Finally, although it is far from the dazzling heights of his best work, Joe Wright should factor into the Best Director conversation. "Darkest Hour" is clearly a star vehicle for Gary Oldman. But underneath it all, it's Wright who is really in the driver's seat, ensuring it stays on track.
Shane Slater at 5:38 PM