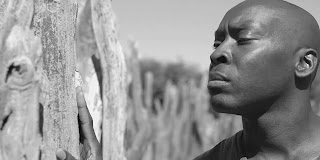 The notion of Africa as a singular country has long perpetuated throughout Western society. Sometimes it's due to willful ignorance, for others it's sometimes inadvertent misunderstanding. But even for the more enlightened citizens of this vast continent's 54 nations, pinning down their own definitive individuality can be a challenge. It's no wonder then, that existentialist narratives like Perivi Katjavivi's "The Unseen" are becoming more commonplace in African cinema.

"The Unseen" is a contemporary look at Namibia, through the eyes of 3 different individuals from various backgrounds. The first is Marcus (Antonio David Lyons), an African-American actor who is visiting to play the role of one of the country's historical leaders. With little guidance from his director, he's left to research the role on his own, hoping to find the "truth" in this unfamiliar landscape. Honesty is also a major concern for our second character Anu (Mathew Ishitile), an aspiring local musician who struggles to find his voice out of his muddled Western and traditional influences. As he looks to more mystical sources for answers, he becomes increasingly isolated from those around him. And finally, the film also follows Sara (Senga Brockerhoff), a disillusioned young woman who returns home harboring thoughts of suicide. As all three of them go about their daily lives, an open-ended essay film emerges on what Katjavivi describes as "what it means to be alive in independent Namibia".

Indeed, "The Unseen" unfolds more like a conversation than a defined narrative. One scene particularly stands out, where Marcus is in a press conference to promote the film and gets into a discussion with a white Namibian about reverence and ownership of indigenous characters/stories. While the white Namibian claims it is his right to play this tribal chief (justified by the "we're all African" argument"), Marcus asserts that a black man would be more appropriate.

The film is at its most resonant when it actively engages with such questions of postcolonial identity. The more esoteric storyline involving Sara on the other hand, keeps the audience at distance. At times frustratingly vague and lacking insight into her inexplicable depression, the character feels inessential to the overall narrative. Ironically, she herself states "I've always had these doubts about whether I ever really existed".

Anu however, is a man of many words, convincingly delivered by Mathew Ishitile. Through a series of conversations with various acquaintances, the actor conveys the internal conflict of a philosophical mind. It's a testament to his acting ability that his musings on teleportation and Greek mythology feel sincere rather than pretentious. And when he talks about his struggles in rejecting/embracing his African heritage through his music, he becomes instantly relatable.

But ultimately, "The Unseen" is less about finding resolutions for these characters as it is about evoking atmosphere. As such, the black and white cinematography plays a big part, perfectly speaking to the central themes with its interplay between shadow and light. In addition, the intermittent use of archival photos provide a welcome geographical and cultural context. But most of all, I'll take with me the images of Namibia's natural beauty, whether it's the trees blowing in the wind, or a shot of giraffes cantering through the savanna. It's therefore completely understandable that these characters feel so lost in this environment, which almost defies comprehension. And for the audience, like the characters, the film's appeal lies as much in this mystery of the sublime unknown as it does in the unseen.
Shane Slater at 7:38 PM