MOVIE OF THE WEEK: As I Open My Eyes 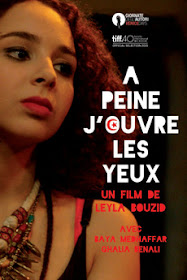 This week's top pick "As I Open My Eyes" takes us to North Africa for the rare Tunisian film to make it big on the world scene. Premiering at the Venice Film Festival, "As I Open My Eyes" is the promising debut feature from Leyla Bouzid. Telling a poignant story of personal and social revolution, it's easy to see why this French-Tunisian co-production has already won festival plaudits for both Best European Film and Best Arab Feature.

Set during the eve of the period of social upheaval known as the "Arab Spring", the film follows 18-year old Farah (Baya Medhaffer), a bright young woman living in the Tunisian capital with her mother Hayet (Ghalia Benali). Having recently passed her college entrance exams with flying colors, Farah has a bright future ahead. But exactly what that future holds is the source of contention between the mother-daughter pair. As lead singer of a rock band gaining in popularity on the basis of overtly political music, she hopes to develop her skills by studying musicology. But Hayet insists on a more sensible and crucially, safer career in medicine. Both refuse to compromise however, and Farah continues to play the music circuit in the local bar scene, a decision which could lead to dangerous consequences.

"As I Open My Eyes" refers to the lyrics of one of Farah's songs, which laments the state of the nation as injustice grows rampant and opposing voices are silenced. To see her perform it, you can immediately understand the gist of its intentions, as Medhaffer's eyes convey all the sorrow in each phrase. In an eye-opening debut role, Baya Medhaffer delivers an emotional honesty that completely draws you in, as one of the film's fascinating central female characters.

Indeed, "As I Open My Eyes" joins recent films like Haifaa al-Mansour's "Wadjda" in its complex approach to depicting Arab women. With her curly hair and carefree demeanor, Farah looks like your typical Western teenager, living in a comfortable middle class home where her independent mother is the head of the house (the father is mostly absent for work). But even as they could easily fit in with a more progressive lifestyle, Farah's impending adulthood reveals how longstanding societal norms can stifle even the most free-minded individuals.

And Tunisia is an ideal setting for this story, being one of the more liberal nations in the Arab world. Many scenes involve heavy drinking and other vices, as Farah and her friends engage in typical teenage behaviour. As expected, Farah comes under the heaviest scrutiny as a female, as partiarchial customs frown on her liberal attitude towards sex and alcohol.

But what becomes uniquely interesting about this quintessentially feminist script is how we come to understand Hayet's perspective. Delivering even more subtext than what's on the page, Benali gives subtle hints that Hayet and her daughter are in fact, kindred spirits. And in doing so, the film shows how people's actions are so strongly influenced by societal pressures rather than personal beliefs. Even as the film insists on painting her as a villain - to almost murderous ends - we leave with the impression that, under different circumstances, Hayet would be rocking out in the front row in support of her daughter.

"As I Open My Eyes" ends with a simple utterance of "continue", referring to Farah's musical exploits in the face of adversity. And the scene speaks to the power of music, which pervades throughout both the film's content and the filmmaking itself. Indeed, the film excels most during Farah's performances, where both director and actor seem to be at their most passionate. But even outside of those moments, there's also an underlying musicality to the filmmaking overall, in the way the camera tracks Farah's movements, the smooth editing, and of course, the melodious score. If it's true that music is the universal language, it's therefore no wonder this film is such a compelling, empathetic success.
Shane Slater at 6:00 AM