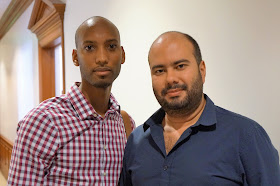 From the Amazon jungle, to the Cannes red carpet and beyond, it has been a long but successful journey for Ciro Guerra and his Oscar-nominated film "Embrace of the Serpent". Now released in North American theaters and with the big Oscar night ahead, this magnificent film will surely captivate new audiences, as it did when I first saw it back at the Toronto International Film Festival. It was therefore a pleasure to get the chance to sit with Guerra last week in LA, where we discussed the making of the film, the Oscars and the recent surge of Colombian cinema.

Read more at The Awards Circuit
Shane Slater at 7:48 AM