MOVIE OF THE WEEK: The Overnight 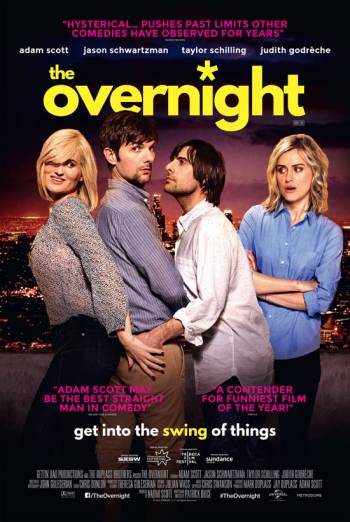 It didn't take me long to realize that "The Overnight" would be my latest Movie of the Week. With a cast featuring some of my personal faves Taylor Schilling, Adam Scott and Jason Schwartzmann, it was already off to a good start before the film even began. By the time the film's innocent dinner party gets its first obscene interruption (by a totally unexpected breast pump video) however, I knew it would become not just my top pick of the week, but one of my favourite comedies of the year.

Schilling and Scott play a married couple in the film, who have just moved to Los Angeles along with their young son RJ. Schilling's character Emily keeps herself busy with a full-time job, while Scott's Alex is essentially a stay-at-home dad. On the surface, the situation seems to work for them, but Alex starts to feel insecure about his lacking social life. But things are about to look up, when a father-son outing to the park offers up an opportunity for new friendships. Through RJ's new buddy Max, Alex and Emily are introduced to Max's parents Charlotte (Judith Godrèche) and Kurt (Jason Schwartzman), who extend a warm welcome and offer to host a dinner/playdate for everyone. But when the night finally comes, things start to get weird, as the boundaries between friends and lovers are increasingly blurred.

The hilarity that ensues is exactly the kind of humour that I love. Raunchy but purposeful, smart but relatable. "The Overnight" perfectly captures the excitement/anxiety/anticipation associated with meeting new people.

And writer-director Patrick Brice takes great care in writing interesting characters. On one side we have the free-spirited "French" attitudes of the hippie-intellectuals Charlotte and Kurt, and then one the other hand, we have the more prudish all-American couple that Alex and Emily represents. And the juxtaposition of their differing attitudes towards sex and relationships offer a fascinating discourse, allowing for all four actors to flourish. Scott brings his usual nerdy goofiness that plays perfectly into Alex's insecurities, Schilling delivers a gif-ready performance with every flabbergasted reaction to all the shenanigans, while Schwartzman and Godrèche are just the epitome of bohemian openness and all the spontaneity that entails.

But what makes "The Overnight" special is how it flips the script on what we'd expect from these personalities. As this overnight romp prances forward with increasing absurdity, it digs beneath its sex comedy trappings to make astute observations about marriage and the truths that can only be revealed behind closed doors. Indeed, it reminded me of a more mirthful take on "Who's Afraid of Virginia Woolf?". And considering the prevalence of lowbrow jokes referring directly to breasts, buttholes and various genitalia, it speaks volumes that this comparison still feels so apt.
Shane Slater at 10:57 PM