MOVIE OF THE WEEK: Paris, Texas 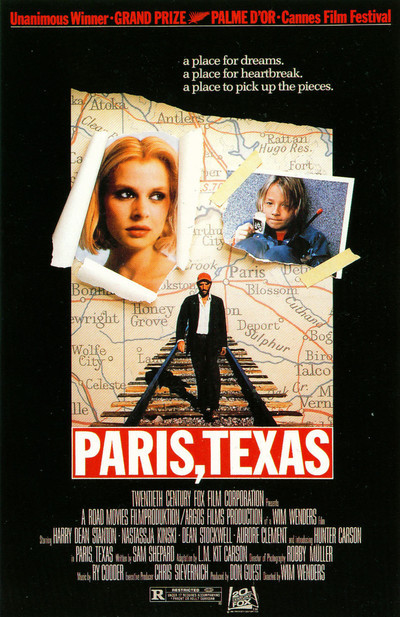 With the 2015 Cannes Film Festival just around the corner, this week's top pick is appropriately one of the most revered Palme d'Or winners of all time. The film is none other than Wim Wenders' 1984 drama "Paris, Texas", starring Harry Dean Stanton. In it, Stanton plays a wandering man who must come to terms with his past when he's found by his brother in the desert.

"Paris, Texas" opens with a majestic wide shot, showing the vast landscape of an unknown desert area of Texas. The scene is desolate, save for a mysterious man (Stanton) who traverses the land with seemingly nowhere to go. It doesn't take long before we find out more about him, as he makes his way to a bar and his brother is notified of his appearance. It turns out that the man's name is Travis and he's been missing for four years.

As his brother brings him to his home in Los Angeles, the initially mute Travis gradually opens up. We learn that Travis left behind a young son, who has since been informally adopted by his brother and his wife. Their reunion is understandably prickly, but they eventually start to rebuild a bond. Something is still nagging at Travis though, forcing him to hit the road again to find closure on the harrowing events that haunted him all these years.

From the outset, "Paris, Texas" carries an intriguing sense of familiarity. Immediately, the film's title and stunning cinematography of its introduction suggest a transformative journey to come. Our central characters also recall movie stars from previous decades, especially Nastassja Kinski as Travis' estranged wife, whose gorgeous side profile takes us back to Ingrid Bergman in her prime. Most importantly though, there's the trauma that Stanton wears on his face and his slight frame. It's of the sort that doesn't take long to identify - heartbreak.

What makes the film so special then, is how Wenders and his screenwriters (Sam Shepard and L. M. Kit Carson) take these familiar traits and manipulates them into something that feels entirely fresh and personal. The Paris of the film's title doesn't represent a final destination, but serves rather as a memory and a perfect "white-picket fence" ideal, which leads to his present despair. Likewise, the subplot of Travis' bonding with his son develops into one of the film's most sincere elements, removing the broad sentimentality that has become commonplace in the road trip subgenre. All the while, the actors give performances - again, Stanton and Kinski deserve singling out - that feel organic and specific to this film. They engage you with every word spoken and every tear cried, never more so than in the pivotal scene where we finally learn the details of Travis' harrowing past.

Ultimately, "Paris, Texas" reminds us that in order to move forward, we sometimes have to revisit the past. Similarly, it proves that familiar cinematic tropes can form the basis for inspired filmmaking. Like Travis, we may bring our own expectations of Paris, Texas. The key to success however, is being prepared to embrace and appreciate the possibility of an altogether different journey.

This film is part of my German Cinema marathon.
Shane Slater at 9:18 PM