MOVIE OF THE WEEK: Luck By Chance 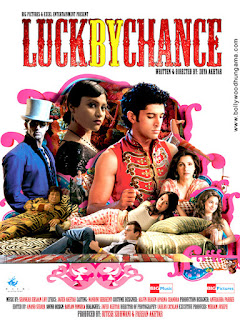 This week's top pick "Luck By Chance" is a rare treat, a non-musical Bollywood film made by a female director. In 2009, Zoya Akhtar made her feature debut with this drama about a young man who finds himself on the verge of stardom in the Hindi film industry. Perfectly befitting its title, I stumbled upon it by chance and subsequently felt fortunate to have witnessed this strong piece of work.

The film begins with our star Vikram (played by Zoya's brother Farhan), who is fresh out of acting school and keen to make a name for himself. As he slums it in Mumbai, he finds company with a pair of longtime friends and a new acquaintance named Sona (Konkona Sen Sharma), his eventual romantic interest. All of them are desperately seeking fame, especially Sona, who has been working for years in small supporting roles, hoping for a breakout. From her, Vikram learns of the difficulty of making it in the world of Bollywood, especially as a woman. But they support each other's dreams without fail, leading to a fortunate event that sends Vikram on the road to stardom. Hearing about an opening in an upcoming high-profile film, Sona selflessly slips Vikram's headshots to the producer (who promised her a star vehicle to no avail) and he ends up charming his way into the lead role. As the fame gets to his head, Vikram starts to crave the good life, including his hot new co-star Nikki (Isha Sharvani). As his star rises, he's forced to learn the hard way that money and fame isn't everything.

"Luck By Chance" is a fascinating riff on the "A Star is Born" narrative, deftly translated to an Indian setting. Its satirical intentions are made clear from the outset, drawing attention to Bollywood's penchant for superficiality and its obsession with a small group of stars. Particularly insightful is its critique of the industry's worship of male actors over actresses. Western audiences would hardly bat an eye at this - it is of course, the established norm in Hollywood - but it's a curious practice for a film industry so resolutely founded on lavish musicals. An early scene in an acting school is especially enlightening, as the instructor states "It is easy to become an actor in Hollywood. But in Hindi films, very difficult. The Hindi film hero not only acts, but also sings, dances, does comedy and excels at action." An aspiring actress then asks about female roles and he curtly responds "That too, takes some...effort."

It's with that attitude that the film makes an intriguing gender digression from the "A Star is Born" template, charting the rise of Vikram and the unending struggle of Sona. All throughout, Akhtar's script makes sharp observations in a metatextual way. Just as the film in the plot tries to break the rules with an anti-hero protagonist played by a fresh face and favors realism over exuberant escapism, so too does Akhtar approach her film and its main character.

Yet while the film challenges the formula in some respects, Akhtar still embraces Bollywood's mainstay traditions. While Farhan was a relatively fresh face at the time (he was more known for his acclaimed direction of 2001's "Dil Chahta Hai"), she fills the cast with a staggering lineup of the industry's biggest stars and personalities. The cameos are the ultimate fan service for Bollywood aficionados. Even I was giddy with delight at seeing the familiar faces. On the other hand, Akhtar adopts some of the less favorable traits of Bollywood films. Specifically, there's always a sense that the film could have gone deeper and darker with its "Inside Bollywood" exposé. Of course, one would assume there were limitations on the film's content. After all, Bollywood is an industry with separate awards categories for "Most Popular Film Providing Wholesome Entertainment". On a technical level, the cinematography is also disappointingly bland for a film about Bollywood.

Taking everything into consideration however, the good vastly outweighs the bad in this instance. Having seen Akhtar's more refined 2011 follow-up "Zindagi Na Milegi Dobara", I accept the minor flaws as first film "greenness". All in all, "Luck By Chance" is conceptually refreshing and thoroughly captivating. It provides rewarding viewing for Bollywood fans and a nice introduction for the newbies.
Shane Slater at 8:41 PM