HIT ME WITH YOUR BEST SHOT: Nine to Five 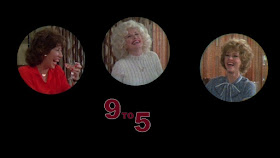 This week's featured film on Hit me with our best shot is the somewhat odd, altogether entertaining 1980 comedy "Nine to Five". Directed by Colin Higgins, it plays like a self-contained sitcom episode of "Mad Men" that's focused on the women while retaining the relatively understated performances. Indeed, there are obvious comparisons to be made with the film's leads, especially Dolly Parton's buxom Doralee and Jane Fonda's inexperienced Judy, who reminded me of Joan and season 1 Peggy respectively.

But enough about "Mad Men". My pick for Best Shot in "Nine to Five" came right off the bat during the catchy opening theme song. 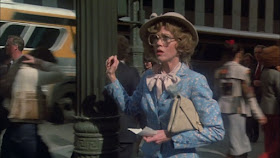 My favourite shot comes from the introduction of Jane Fonda's character as she arrives in the big city to start a new job as secretary. With her frumpy "country bumpkin come to town" look and her bewildered expression, this character entrance immediately drew me in. I desperately wanted to find out what happens to this woman. I mean, this looks like a movie makeover waiting to happen, right?

I have to give credit to Higgins and his co-writer Patricia Resnick then, as they allow her to grow throughout the course of the film without her personal style becoming a plot point. Instead, the script presents a story that promotes female empowerment and solidarity with a lighthearted touch and ample wit. It's amazing (read: sad) how its gender politics issues can still resonate since the era depicted in "Mad Men" all the way through to the present day.
Shane Slater at 6:36 PM