HIT ME WITH YOUR BEST SHOT: Mommie Dearest 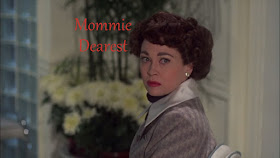 In honor of April Fools' Day, Nathaniel chose a doozy of a film for this week's Hit me with your best shot - "Mommie Dearest". This camp classic was a major winner at the 1982 Razzie Awards (and once again 8 years later, winning Worst Picture of the Decade) and is infamous for Faye Dunaway's portrayal of Joan Crawford. This was my first time watching the film and boy, Dunaway's go-for-broke performance is certainly memorable. She really should be commended for taking on such an unflattering role. In choosing my best shot, I was naturally drawn to the trademark element of Crawford's persona - her face. 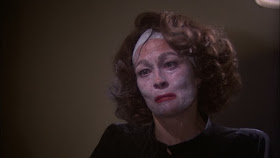 When we did the 1947 Joan Crawford vehicle "Possessed" for this series, the shot I chose was a close-up of the actress' expressive face. Such was the case in "Mommie Dearest", as so much of the film's appeal depends on Dunaway's face-related performance - her screaming, her snarling, her sinister eyebrow-raising. Dunaway and Crawford hardly resemble each other, but the makeup work and the performance do a great job at conveying this character.

My selected shot comes at the end of that crazy "wire hanger" scene and it showcases the makeup and the performance. It also sums up my conflicted feelings toward the film. "Mommie Dearest" is simultaneously frightening and comical, with a lead performance that manages to be both the best and the worst of the year. Whichever side you land on, Dunaway makes sure you'll never forget it. That ghoulish face is the stuff of nightmares.
Shane Slater at 6:48 PM