MOVIE OF THE WEEK: Water Lilies 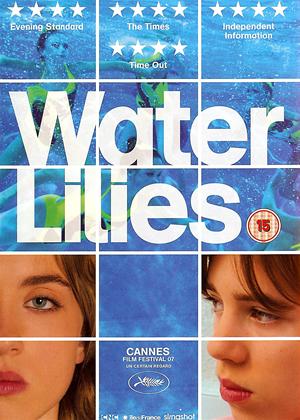 This week's top pick is the debut feature of Celine Sciamma, one of the most promising directors around. The film is "Water Lilies" and it's set in a suburb of Paris, where a trio of young girls are on the verge of sexual awakenings. As has come to be Sciamma's trademark, it's a delicate coming of age film framed around the fresh performances of her young actresses.

"Water Lilies" follows the exploits of Marie (Pauline Acquart) and Anne (Louise Blachère), a pair of 15-year old best friends who live in a Paris suburb. The film is set in the summer, where the two spend much of their time at a local swimming pool, where Anne trains as part of the synchronised swimming team. It's there that she first glimpses Floriane (Adèle Haenel), one of Anne's teammates. With her confidence and natural beauty, Marie is instantly enchanted by Floriane and strikes up a friendship. As the summer days pass by, a friendship triangle forms that reveals their secrets and desires. The plot thickens with teenage lust, as Floriane struggles with her promiscuous image, Marie with her queer attraction and Anne with her feverish sexual longing. By the end of the summer, their relationships and personal outlooks will have changed as they learn the realities of sex and value of true friendship.

As we learn more about these three girls, Sciamma's script shows a keen understanding of the sociology and psychology of young teenage girls. While it paints an unfavourable picture of the male species, it's always fair, showing how girls' relations with each other can be detrimental too. In varied ways, it strongly speaks to the emotional damage that girls inflict on each other, sometimes unwittingly. In Floriane's case, she's so widely known as a slut that she resigns herself to living up to the image, despite no desire to do so. She's effectively cursed by her own beauty and success (she's the swim team's captain), as jealousy causes rumours to manifest. It's a fascinating change from the usual high school drama, where the pretty girls are put on a pedestal.

In a similar fashion, Anne's actions are influenced by outside expectations. Throughout the film, she makes forthright efforts to lose her virginity, which are obviously stimulated by a need to prove herself attractive to the opposite sex. In a world of hard-bodied athletes, even her best friend views her as an ugly duckling.

The most severe act of emotional violence is saved for the timid Marie however. As she pines for Floriane, it doesn't take long to recognize that it's a one-sided romance. Floriane is way too self-involved and free-spirited to devote herself to the demure Marie, but the latter isn't mature enough to understand this. Indeed, one could easily imagine "Water Lilies" as a hard-edged psychosexual thriller with Floriane as its dangerous femme fatale. Such is the allure of Adèle Haenel, who deservedly received a Cesar nod for Most Promising Actress (along with Blachère).

Though it may be a small film in terms of scale and scope, "Water Lilies" exhibits the perceptive traits that Sciamma has become known for. Her characters are well-defined and easily empathetic, with tangibly relatable insecurities. Sciamma may have expanded her narrative ambitions in her later work, but this remarkable debut is invaluable as a blueprint for what is destined to be a long, exciting career.
Shane Slater at 7:58 PM