MOVIE OF THE WEEK: The Girl Is In Trouble 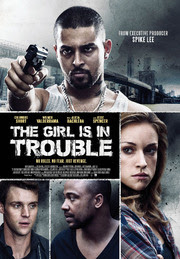 At a critical juncture in Julius Onah's relentless thriller "The Girl Is In Trouble", an uber-privileged white man (Nicholas,played by Jesse Spencer) encourages a struggling first-generation Nigerian-American (August, played by Columbus Short) with a cry of "Yes You Can!". The tone is knowingly condescending, preying on the adage made famous during Barack Obama's presidential campaign. Whether intentional or not, the comment bears deeper meaning, arriving towards the tail end of a multi-narrative plot that's acutely aware of the social dynamics which propel it.

All of the action leading to this moment centers around our main protagonist August, a down on his luck aspiring DJ who has just been fired from his job as a bartender. Plopped onto his bed to call it a night, he soon gets an unexpected phone call. It turns out to be Signe (our eponymous girl in trouble), the attractive Swede he met some nights before. She explains that she's seeking some company before flying back home and August invites her over, anticipating a fun nightcap to come. In the light of day however, things take a turn for the worse. Before he knows it, August becomes embroiled in a murder mystery involving Signe, a missing drug dealer and an entitled heir of a major investment firm.

"The Girl is in Trouble" may pose as your run-of-the-mill crime thriller, but it's one that aims to make a statement about our world. Its script is primarily concerned with the way desperation affects the lives of those seeking the American Dream. Of its core cast, the characters are carefully selected, including a Nigerian-American (August), an American Jew (Nicholas) and a pair of Latino Americans (played by Wilder Valderrama and Kareem Savinon). Interestingly, the most desperate of them all is the pretty white girl from Sweden of all places. And what better place to set this story than New York City (the Lower East Side, to be exact), the ultimate melting pot within the immigrant nation called the United States of America.

It's hard not to infer a personal attachment to the story on the part of writer-director Julius Onah, a Nigerian-American himself. The multiple narrative strands suggest a keen interest in the shared experience of struggle among its characters, even the wealthy Nicholas. Onah explores this with great stylistic verve, employing purposeful flashbacks, deadpan voice-over narration, rapid editing and clever social media references to reveal the connections between them. It all feels convoluted at first, but soon reveals a clear narrative focus, like Tarantino in "Jackie Brown" mode.

Consequently, the character-focused dramatic scenes fare better than the action-thriller ones. The latter is mostly a series of rudimentary tropes (interrogations in dark rooms and shady dealings in cars). On the other hand, the main dramatic thrust remains potent. From recounting the ethnographic history of the Lower East Side, to a shot of side-by-side Clinton and Obama portraits, Onah effectively and impressively roots the story on the notion of hope. In this case, it's the disappointment associated with such hope that binds its victims in a web of drugs and murder.

In his admirable quest for socio-cultural relevance, Onah's does falter in some aspects. Specifically, there's a misogynistic element to Signe's predicament that doesn't quite land. One particular rape comment by our protagonist felt wildly out of character and sticks out like a sore thumb. But the sentiment (i.e. the spotlight on misogyny) is valid and doesn't negate the otherwise solid film-making surrounding it. As a debut director, Onah shows a lot of promise. Further special mention must also go to Columbus Short, who finds a perfect fit in this lead role. Misfortune and everyman plainness look good on him.