HIT ME WITH YOUR BEST SHOT: The Quiet Man 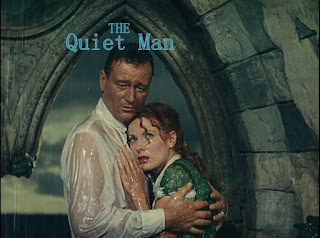 This week on Hit me with your best shot, we watched a film that was practically tailor-made for this sort of analysis - "The Quiet Man". In a filmography chock-full of gorgeously shot films, it says a lot that "The Quiet Man" puts forth a strong case for being the most beautiful of them all. Cinematography Winton C. Hoch captures the Irish landscape so vividly here that it makes you want to pack up your bags and go. On this viewing, I once again found myself enamored with the film's color palette, especially those rich, deep reds. That particular color really pops from the screen in this film. You notice it in the costumes, but also in the hair of it that fiery beauty named Maureen O'Hara. For my best shot, I decided to highlight this redness. 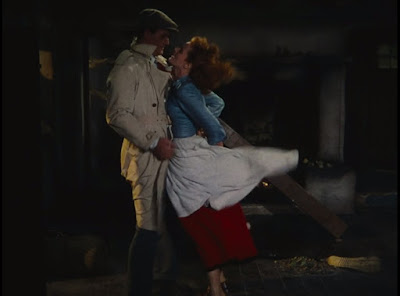 As I mentioned earlier, "The Quiet Man" is most notable for its landscape photography and its eye-catching brightness. But there's more to its cinematography than those outdoors scenes. One such example can be found in the scene depicted above, where even the darkest room is still a feast for the eyes. I just love how O'Hara stands out with her red skirt and that flowing red hair. There's so much drama in the scene, so much lust and passion. I don't know about you, but I was detecting some serious sexual chemistry between these two lovers all the way through. It's why I purposely chose this moment just before their first kiss. Despite the conservative Irish traditions of the setting, the heat between them was undeniable. They didn't even need to kiss to show it.
Shane Slater at 7:09 PM