REVIEW: Life Inside Out 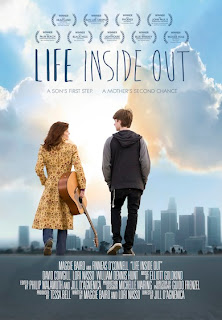 Look at the lineups for any independent film festival and you'll observe that stories about personal reinvention are popular and common within cinema today. Just last year, two indie hits - "Begin Again" and "Chef" - featured such glaringly similar plot devices that one could have assumed they were written by the same person. While Jill D'Agnenica's new film "Life Inside Out" may not entirely change up this popular narrative, it gives a refreshing take, where the reinvention is about reaching deep inside yourself rather than changing who you are.

"Life Inside Out" tells the story of Laura - a wife, sister, daughter and mother of 3 who is dealing with uncertainty in her professional and personal life. Her husband is struggling to live up to his role as the breadwinner, requiring her to go on an unsuccessful job hunt. Meanwhile, her youngest son Shane has just hit the sulky teenage years to the bewilderment of his parents. One day however, Laura randomly decides to revisit an old passion (music), bringing back a sense of purpose and joy in her life. To help perfect her craft, she starts attending a weekly open mic night and brings Shane along for the ride. Soon enough, the pair realize they have much more in common then they thought (Shane has natural musical talent too), developing a deeper bond than either could have ever envisioned.

Based on the real life experiences of mother-son acting duo Maggie Baird and Finneas O'Connell, "Life Inside Out" is an uncommonly authentic film. Every scene is filled with little details that remind you of your own family dynamics - the brutal honesty between siblings, the rebelliousness of teenagers, the intrinsic selflessness of a mother. This lived-in quality is right on the mark. On a more general perspective, it approaches its plot with welcome restraint. Whereas other screenwriters may have chosen to turn Laura's musical aspirations into an all-encompassing family concern, Maggie Baird and Lori Nasso smartly hone it down to a more private, intimate level. In doing so, the burgeoning relationship between mom and son feels more earnest and truthful. The way they initially develop their music (performing and writing their own songs) like it's their own little secret is truly endearing.

That isn't to say the film isn't without its clunky moments, but those are overshadowed by the sensitive performances by the cast. Baird and O'Connell are a joy to watch, as their acting styles complement each other like a perfect duet. Their actual musical duets are beautiful too, contributing to the film's winning soundtrack. With its pleasant music, sincere performances and heartwarming script, this lovely film is one of 2015's first highlights.