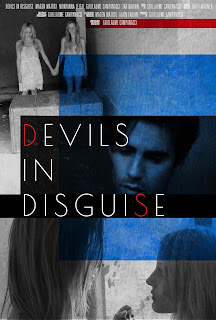 In an increasingly competitive environment for film production, many indie filmmakers have turned to crowdfunding to help finance their films. Success stories include "Finding Vivian Maier", "Dear White People" and "Wish I Was Here". Recently, another new film (currently in post-production) has been brought to my attention after a favourable response at the Cannes Film Festival. Read below for more information:

Inspired by a variety of staple films from the past, a cinema lover and a renaissance man, Guillaume Campanacci, composed his maiden feature movie around a 'classic love triangle, with a twist', against a Californian urban setting.
The story centers around two flatmates, Leila (Magen Mattox) and Sandy (Montanna Gillis), who conspire to take revenge on Leila's sadistic boyfriend (Guillaume Campanacci). It is a film underlined with violence and told through strong, non-linear structure, with poetic and sensual imagery. In essence, it's a meditation on friendship, love, trust, and murder, presented to us as a perfect blend of reality and dream-like fantasy sequences.

"Devils in Disguise" has been filmed and is currently running an Indiegogo campaign to help with post-production costs. Please follow the link below for details on how to support this film.