HIT ME WITH YOUR BEST SHOT: Cries and Whispers 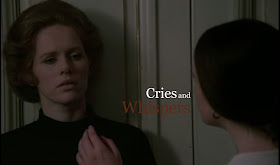 This week on Hit me with your best shot we tackled a film by the esteemed Ingmar Bergman - "Cries and Whispers". This was my first viewing of the film and as expected, I found it to be a fascinating, singular piece of work. It even resonated with the Academy, managing some major nominations (Best Picture, Best Director, Best Original Screenplay etc.). In my case, I was entranced by its ability to be so austere and yet highly emotional at the same time. The 4 actresses (Harriet Andersson, Kari Sylwan, Ingrid Thulin and Liv Ullmann) are especially fabulous in this regard.

Of its 5 nominations, it managed to win Best Cinematography and it's certainly deserved. For this series, the image that stood out to me most is said to have deep thematic meaning for the film (the use of the colour red). I however, chose it as my best shot for purely aesthetic reasons. I love everything about it - the framing, the dresses, the actresses' poses, the decor. It looks like a high fashion editorial and strongly conveys Bergman's artful vision. 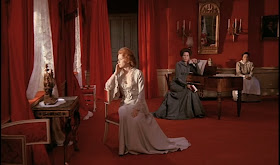