HIT ME WITH YOUR BEST SHOT: Batman: The Movie 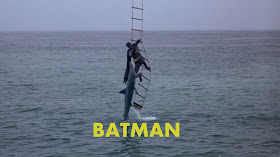 Hit me with your best shot returns this week and it's a Batman celebration! For this assignment, Nathaniel had us select any of the 9 theatrically released Batman movies for our best shot. I decided to go with one that I hadn't yet seen - "Batman: The Movie" from 1966. Having now experienced this strange film, I now fully understand the extensive transformation that the comic book/superhero movie genre has undertaken.

Under the scrutiny of modern eyes, this film provides a unique challenge. It's the rare occasion where any criticism I can throw at the film could just as easily be interpreted as compliments. "Batman: The Movie" is dumb, phoney and slight...but that's exactly what they were aiming for! From the very beginning, it's clear that you shouldn't take this very seriously. The performances are just so chipper and tongue-in-cheek. Really, the events of the movie are just an elaborate private party game and you can't convince me otherwise.

Despite the relentless stupidity, it's a fun watch (that bomb disposal scene is comedic brilliance) and I eventually began to appreciate its warm embrace of its comic book origins. This lead to my pick for best shot below. 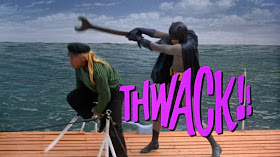 My favourite shot comes from the final battle between good and evil. Unlike the grandiose showdowns we see nowadays though, this is just a bunch of men in funny-looking costumes having a tussle. The exclamatory excitement depicted leaves no doubt that none of this is real. In the end, it's that same fakeness that gives it that "comic book" authenticity.
Shane Slater at 9:08 PM