TRIBECA FEST: Wrapping up the festival 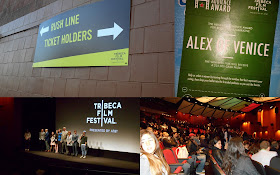 The 2014 Tribeca Film Festival continues through April 27th but sadly, my time is up. This was a different experience from NYFF last year due to my tight schedule (had a wedding to attend) which forced me to watch some films online. Still, it was a pleasant experience overall, even though there were no knockout films. I could definitely see myself coming back, especially to try out some of the cool sidebar events.

To close out my coverage, here are a few random thoughts and observations:

Here's how I'd rank the 8 films I saw (in order of preference):