MOVIE OF THE WEEK: Take My Eyes 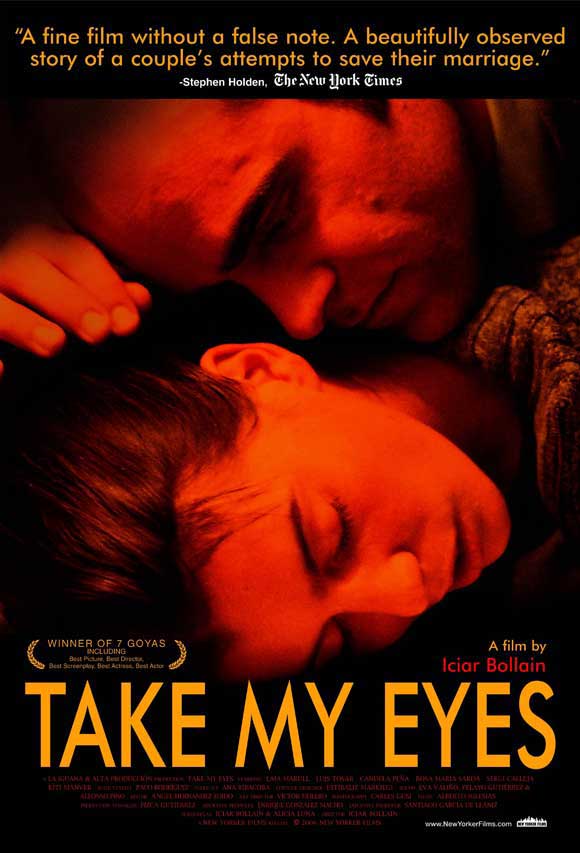 This week's top film is a Spanish film of significant social relevance - "Take My Eyes". Directed by Icíar Bollaín, it tells the story of a wife/mother who suffers through domestic abuse. As she nears her breaking point, the film takes us through her harrowing ordeal. Will she rise up and liberate herself?
The film opens with a seemingly critical scene. Our lead character Pilar (Laia Marull) has had enough. Distraught and trembling with fear, she packs up her stuff (young son included) and runs away in the middle of the night. She soon lands on the doorstep of her sister, finding sanctuary at last. It's the ending we all want for such women but of course, life isn't so simple.
Indeed, this lack of idealism is the most fascinating aspect of "Take My Eyes". Unlike the more triumphant stories of female empowerment in the similarly-themed "Provoked" and "Enough", this film shows the harsh, complex (and often cyclical) nature of abusive relationships. This strikingly even-handed script shows rare insight, as we learn about both sides of the struggle between this man and woman.
In order to create empathy for the devil, the script smartly ensures that we get an equally thorough portrait of the husband Antonio (Luis Tosar). Pilar's departure frustrates him, driving him to anger management therapy and persistent grovelling for her forgiveness. As he fights to win her back, his hidden insecurities emerge - mainly his failings as a husband and provider.
Most importantly though, the film helps us to understand why Pilar would tolerate his aggression in the first place. Despite the violence and psychological torment, the truth is that Antonio is a passionate lover. This realization forms the basis of the film's title. The phrase "take my eyes" is taken straight from a sex scene when Pilar goes back to her husband. In a feat of intense seduction, Pilar declares that every piece of her is now his possession, including of course, her eyes. Everything you need to know about how this relationship - and the film itself - works, can be summed up in these scenes. Palpably erotic, the raw intensity is a great credit to the phenomenal acting by Marull and Tosar, as well as Bollain's direction. It so perfectly captures the level of selflessness that marriage requires. It's why I believe that the literal translation of the Spanish title "Te doy mis ojos" would be more apt. To translate directly, it means "I give you my eyes". This phrasing gives Pilar the true agency that she displays in the film. After years of willingly giving herself over to a man, she now has to reclaim her sense of self. By opening with that scene of self-liberation, only to bring her back into the mud with Antonio, we are therefore more able to invest in the complex nature of her decisions. Will Pilar 2.0 include Antonio in her life? The answer is neither obvious nor easy to explain.
Everything leads to the film's powerful conclusion, leaving Pilar at a crossroads after finally coming in to her own. The final scene therefore leaves us with food for thought, posing the question - Who is the weak one? Pilar or Antonio? After viewing the events of this film, the final answer may surprise you. It's evident that vulnerability and weakness manifests itself in many forms. Tyler Perry's several man-hating films may give you the Cliffs Notes version of this, but "Take My Eyes" is the real deal.
Shane Slater at 10:29 PM