HIT ME WITH YOUR BEST SHOT: Pocahontas 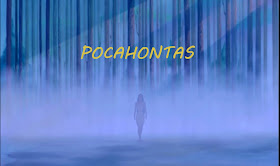 This week's film for Hit me with your best shot is an animated one - 1995's "Pocahontas". This tale of forbidden love had the unenviable position of following "The Lion King" from the year before and it proved to be a tough act to follow. As a Disney fan myself, I take no pleasure in admitting that this is one of my least favourite Disney films. Among a slew of memorable musicals from the studio's renaissance period, this one only managed to have one good song ("Colors of the Wind"). Furthermore, something about the character animation always falls flat for me.

However, the environments surrounding these characters are very lovely. In retrospect it makes sense perhaps, considering the pro-nature themes of the film. The beautiful setting was therefore the focal point of my favourite shot this week. 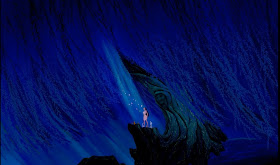 For me, this shot captures the main messages of the film. Pocahontas is the focus (emphasized by the spotlight over her) but she's still dwarfed by the majesty of the earth. The backdrop has a nice texture to it, which seems to convey the idea behind the lyric:

"Can you paint with all the colors of the wind?"


The softness and fluidity of all the elements (the animals, Grandmother Willow, the branches and leaves) also evoke the idea of "oneness" with the earth. Throughout the film there are other similarly compelling wide angle shots, but this one spoke to me the most. It's simply beautiful.
Shane Slater at 5:44 PM