HIT ME WITH YOUR BEST SHOT: Mean Girls 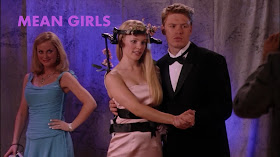 This week on Hit me with your best shot, Nathaniel decided to revisit "Mean Girls" in honour of its 10-year anniversary! This fantastic teen comedy has built up a solid reputation since its release, due mainly to its quotable lines and memorable scenes. Critics have also championed the script's sharp observations about silly high school politics. Really, the mind games are enough to make your head spin!

Upon this rewatch, I was again reminded of how genuinely enjoyable it is. The plot moves along with a remarkable efficiency and it's so consistently funny. Even more impressive is that it has aged quite well in this superficial #selfie age of ours.

While the film is known for its humour, my chosen shot is more of a downer. It comes from an unintentionally "meta" moment involving Lindsay Lohan's Cady Heron character. 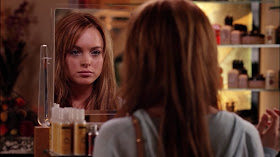 My favourite shot comes from a moment right after Cady begins her plan to sabotage Regina. Initially reluctant to become involved with "The Plastics", she is now unable to resist the addictive lure of popularity. There's even a scene before this that shows various students declaring how cool she is, indicating her newfound status as high school royalty. Interestingly, she's very much aware of the fact that she's heading down the wrong path. She even describes herself as "a woman possessed".

For me, this particular image and the ticking bomb scenario is eerily prescient for both the character and the actress. Her reflection in the mirror immediately reminded me of those numerous mugshots of Lohan with those enhanced pouty lips. Just like her character, Lohan was about to make some poor life decisions not too long after this film. It's a shame she didn't learn those lessons from the film about what it means to be a good person. It's almost a case of life imitating art (although Cady's antics paled in comparison to Lohan's confrontations with the law). Her downfall is such a shame, since she showed so much promise. It makes me want to scream out like Barbara Hershey in "Black Swan"...."What happened to my sweet girl?"
Shane Slater at 7:25 PM