HIT ME WITH YOUR BEST SHOT: Can't Stop The Music 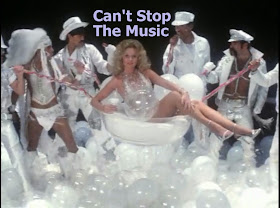 In honour of April Fools' Day, Nathaniel chose a perfectly silly film for Hit me with your best shot this week - 'Can't Stop the Music'. This story about the formation of The Village People holds the inauspicious title of being the first winner of the Golden Raspberry for Worst Picture. It doesn't come as much of a surprise after watching it, as it really is hilariously awful (emphasis on hilarious). There are so many things wrong with this film but it's also a lot of fun, very much in the spirit of The Village People. Indeed, the plot has a lot of visually amusing things going on, but there was no doubting which scene would contain my best shot. It comes from the moment that I was personally anticipating the most - the performance of "Y.M.C.A.". 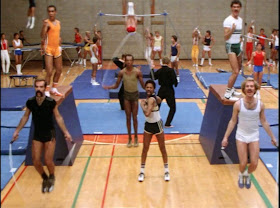 When you think of The Village People, it's likely that the iconic "Y.M.C.A." song is the first thing to come to mind. It has infiltrated pop culture so much that I was certain that it would be reserved for the final concert showstopper. As it turns out, I was wrong. The song is performed much earlier and the decision was far from a disappointment. In a film filled with many sight gags, this is the one that caused me to let out the biggest belly laugh.

To be honest, I never gave much thought to the lyrics of "Y.M.C.A." before watching this movie. It was therefore quite fascinating to see it portrayed in such a ridiculously literal way, while also depicting the obvious gay subtext. The relevant scene is actually a rather elaborate rehearsal, showing a gym full of muscled men gleefully engaging in all sorts of sporting activities. It certainly gave more "oomph" to this lyric:

"You can hang out with all the boys."


Clearly, you can get in great shape at the Y.M.C.A. From the looks of those sassy men on the pedestals though, it's not only about the exercise, if you know what I mean. Last week, I ruminated on the masculinity of Russell Crowe in "L.A. Confidential" and this film also showcases macho men, albeit of a different sort (midriff tops, tiny shorts and glitter!). Interestingly, the words "gay", "homosexual" or any such variant aren't uttered once throughout the film, but it's all implied in the film's exuberant flamboyance.

Back to the shot itself though. It's really so bizarre in context. It's like a training montage from a sports movie, except this is a musical. Remember this is a rehearsal! I know performers need to be fit, but gymnastics? Karate? Are they training for the Olympics? It actually reminded me of that boot camp scene from this film's spiritual cousin "Spice World". Like Posh Spice's stilettoed training gear, it hardly makes sense but at least we're all having fun, viewers and movie characters alike.
Shane Slater at 6:56 PM