The 6 Key Predictions for your Oscar Pool

After a long awards season with an abundance of precursors, the Oscar ceremony can sometimes feel anticlimatic in terms of the winners. Most of the categories have such strong frontrunners that I'm sure that the many nominees don't even bother preparing acceptance speeches. Still, there are always more or less 6 categories that are still unknown quantities ahead of the big night. Predicting those categories can therefore make the difference between winning and losing your office Oscar pool. This year, these are the categories that you need to pay particular attention to (apart from the shorts of course):

Lupita Nyong'o vs Jennifer Lawrence
She nailed her performance, nailed her red carpet appearances and nailed her acceptance speeches but will Lupita Nyong'o win the Oscar? A week ago I would have answered with a definitive "yes" but the result of the BAFTA awards makes this seem too much like a Viola vs Meryl redux. Firstly, Lupita/Viola both won Critics Choice + SAG, while Jennifer/Meryl took Golden Globe + BAFTA. Also, at the ripe old age of 23, Jennifer Lawrence has basically become an Oscar darling with 3 nods in 4 years (including a win). For a newbie like Nyong'o on the other hand, the Academy is likely to already feel pleased with themselves, applying the philosophy "it's an honour to just be nominated". I think the writing's on the wall. 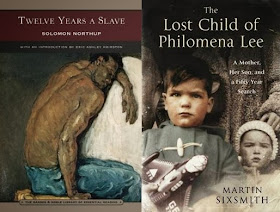 12 Years A Slave vs Philomena
I'm in the camp that believes 12 Years A Slave will win Best Picture in a split with Best Director. However, it really does seem like it will struggle to win awards elsewhere. Hence, I think it will have to get at least one coattail win, much like Argo last year.


My prediction: 12 Years A Slave 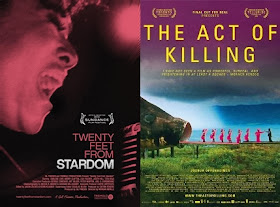 
My prediction: 20 Feet from Stardom

"Let It Go" vs "Ordinary Love"
Many seem to think that "Happy" is surging as the main challenger to "Let It Go" but I think the dark horse is actually "Ordinary Love". It has a legendary band behind it (U2), it won the Golden Globe and the song itself is pretty good. Ultimately though, I think Frozen will be too big to ignore.


My prediction: "Let It Go" 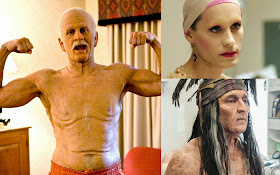 Bad Grandpa vs Dallas Buyers Club vs The Lone Ranger
This category is wide open, since the consistent precursor winner (American Hustle) wasn't even nominated! You might as well go "eeny meenie miney moe". Bad Grandpa is the showiest of the field, but the film itself lacks the "prestige". Dallas Buyers Club has the benefit of a Best Picture nomination, but the makeup and hairstyling work isn't overly memorable. The Lone Ranger stands out for the fantastic aging makeup on Johnny Depp, but those scenes are minimal.


My prediction: The Lone Ranger

Gravity vs ?
Gravity is expected to be a juggernaut in the "tech" categories, but BAFTA proved that this particular win is not yet set in stone. With its long takes, it's perhaps the "least edited" of the contenders and this award often goes to more obvious editing showcases. Hence, Captain Phillips is a very strong contender, with Christopher Rouse already having won this category for a Paul Greengrass action film (The Bourne Ultimatum). 12 Years A Slave could also conceivably take it, via the coattail argument for Best Adapted Screenplay. I wouldn't count out American Hustle or Dallas Buyers Club either, as it's clear that the voters were big fans of those films.

Bonus: I'm running a small "Pick 6" Oscar contest where you can win a $25 Amazon gift card for correctly predicting the 6 categories above. The catch? You must predict all of them to win. Click here to play (closes on Saturday March 1st, 6PM EST).


Do you agree that these are the most competitive categories this year? Let me know in the comments.
Shane Slater at 5:45 PM