MOTIFS IN CINEMA 2013: Appreciation of Life 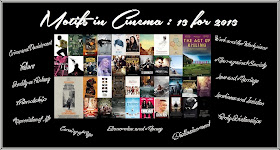 Motifs in Cinema is a discourse across film blogs, assessing the way in which various thematic elements have been used in the 2013 cinematic landscape. How does a common theme vary in use from a comedy to a drama? Are filmmakers working from a similar canvas when they assess the issue of death or the dynamics of revenge? Like most things, a film begins with an idea – Motifs in Cinema assesses how various themes emanating from a single idea change when utilised by varying artists.

"Appreciation of Life" is a theme that is fairly common throughout film history. When we go to the cinema we often seek a certain level of escapism that lends itself to positive life-affirming stories. In that regard, one can approach the theme from two different perspectives. For example, a film can convey appreciation of life through its characters' own attitudes. On the other hand, the construct of a film may convey the theme by allowing you to appreciate the life of a character (biopics and documentaries are especially good for this). With that in mind, I will be highlighting 6 different films that relate to the theme of Appreciation of Life. Though they vary in scale and genre, they are all linked by this common theme.

One of my favourite foreign language films of 2013 was the Chilean drama "Gloria". It centers around an older woman who struggles with loneliness after a divorce and the departure of her children. To counter this, she frequents night clubs in search of joy and companionship, eventually finding a measure of success. She meets a man and becomes romantically involved with him, but it comes with its own complications. In reviews of the film, some have criticized her actions (particularly within the relationship) as selfish. I however, saw someone who was relatably flawed and determined to secure her own happiness. In doing so, we get a robust character study that is beautifully acted by Paulina Garcia. She fully embodies Gloria, a character who encounters significant disappointments but remains ever ready to tackle life's challenges and embrace its pleasures. She clearly appreciates life for life itself and that effervescence is truly admirable. By the end of the film, she makes you want to get up and dance (if you've seen the film you'll understand what I mean).

Like "Gloria", "Gravity" can also be viewed as a character study of a central female figure. Though not as thorough as the aforementioned film, the story of Sandra Bullock's Ryan Stone character makes for an interesting comparison. She too is suffering through loss (the death of her daughter) but unlike Gloria, she chose to retreat into emotional stasis. In the film, Stone is an engineer working on her first space shuttle mission when catastrophe hits. The resulting physical and emotional turmoil is handled perfectly, which made "Gravity" my #1 film of the year. More specifically, there's a pivotal scene which kickstarts the subsequent emotional/spiritual journey of the character. After the destruction of the shuttle, she has given up hope. This prompts her to accept her impending demise, embracing it yet expressing disappointment with how her life turned out. That disappointment is an early catalyst for the film's biggest theme - rebirth. The much discussed "ghost Clooney" scene follows, which acts to transition her emotional state from indifference to active optimism. It all leads to a thrilling climax with the image of a woman standing tall and triumphant, appreciating life anew.

Yet another lonely individual takes center stage in "The Secret Life of Walter Mitty". This film depicts the epic adventure of our title character, a dull daydreamer who gets the opportunity of a lifetime. Mitty manages the photography for Life magazine and one day is forced to go on the hunt for a missing negative, shot by a major photojournalist. After a life full of fantastical daydreams, he finally gets the motivation to embark on a daring real life adventure. As he goes on scenic trips through Greenland, Iceland and the Himalayas he finally understands what it means to live life to the fullest. Of all the year's releases, this is perhaps the most literal interpretation of "Appreciation of Life", with its beautiful cinematography, upbeat soundtrack and heartwarming story. As Walter Mitty shows, appreciating life is more than just being content with your daily routine. Sometimes you need to go out and explore the world to understand its potential.

One can definitely see a kindred spirit between Walter Mitty and the main characters in "The Kings of Summer". This film is an endearing ode to boyhood that won me over with its pleasant simplicity. It involves a trio of boys who run away from home, building their own abode in the woods to roam freely during their summer holiday. What struck me most about this film is how it captured that carefree feeling of youth. Even as it triggered personal feelings of nostalgia, it also reminded me that it was a portrayal of a time gone by. As an adult, you have responsibilities and worries that would prevent you from making this decision. For example, I immediately wondered about things like sanitation, food and safety in the woods. There are also the concerns about job commitments, bills, mortgage etc. For these boys however, none of these factors come into play. They are able to simply enjoy themselves without any baggage. It therefore suggests that this period of our lives is when we have the purest appreciation of life, when the company of friends is all we need.

In my intro, I referred to the ability to elicit the audience's "Appreciation of Life" through the concept of a film. Specifically, films have the power to allow persons to appreciate the life of someone they don't know. One of the best examples of this then, is "Fruitvale Station". Of course, the ominous nature of this true life story isn't life-affirming in the typical sense, but the way that writer-director Ryan Coogler chose to tell his protagonist's story certainly expresses an appreciation for his life. The film follows a day in the life of a young man named Oscar Grant, an ordinary day that ends up being his last. One of the most noteworthy aspects of the film is the banality of Grant's life. He wakes up and goes throughout his day preparing for New Year's Eve celebrations. There's truly nothing dramatically extraordinary about it, but it's due to this that the fateful ending becomes so poignant. Grant may not come from the same background (socioeconomic, cultural etc.) as you but the film instills a great sense of humanity in our understanding of this person. Anyone can relate to his compassion, joy, anger and his desire to improve his life. Coogler aims to present a man who had a passion for life, but more importantly he wants you to appreciate this life that was tragically lost. Well, I'd say his mission has been accomplished.

Finally, I'd like to highlight the film that for me, captured the theme best - "Life According to Sam". There are many documentaries that would fall under the theme "Appreciation of Life", particularly human interest stories like "Which Way Is the Front Line from Here? The Life and Time of Tim Hetherington". But "Life According to Sam" is the one that really left its mark on me last year. The subject of this doc is a boy named Sam, who is inflicted with a rare disease called Progeria which basically causes the aging process to rapidly accelerate. As a result, the average life span of those with the disease is only 13 years. The film follows Sam and his parents who spearhead a foundation to conduct research in hope of finding a cure. It's clearly a dire situation, making it a sometimes depressing watch as you are acutely aware of the "ticking clock". Yet despite this, there were just as many tears of joy as there were tears of sorrow for me. That's all due to the spirit of Sam himself. Despite his awful predicament, this inspiring young man is ambitious (he excels at school), sociable, cheerful and optimistic. It's for these reasons that the recent news of his death deeply saddened me. Even though it was inevitable, his amazing persona made it hard to comprehend that his life could be so abruptly cut short. For me, there was no film that better showcased "Appreciation of Life" than this one. For someone whose life was harshly doomed at birth, Sam was remarkably able to heartily brace it, putting so many healthy persons to shame.
Shane Slater at 6:52 AM