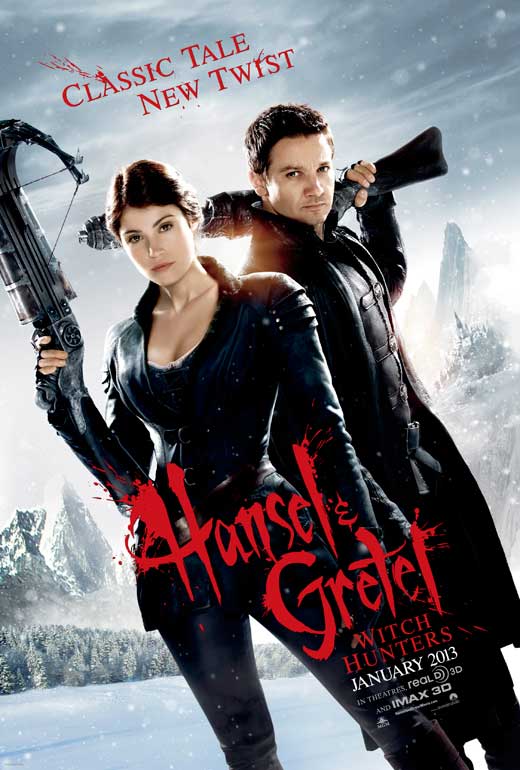 Eternally in vogue, the Grimms' Fairy Tales received the Hollywood treatment yet again with 2013's "Hansel & Gretel: Witch Hunters". The tale tells that of siblings Hansel and Gretel, who escaped death at the hands of a wicked witch who tricked them with her candy cottage. Using their wits, these children manage to push her into an oven to be burnt alive and they live happily ever after. This is the story's foundation in both the traditional story and this film, however this 2013 adaptation takes it one step further, continuing their witch-killing tendencies through adulthood, transforming them into ferocious bounty hunters. It's a bold narrative choice but does it work?
Well, the simple answer is no. What we have here is an uninspired take that lacks any sort of distinctive filmmaking style. The visuals are plain, the characters are broadly written and the action is over the top. As much as "Snow White and the Huntsman" was bashed last year, at least it had a well-defined tone with its moody cinematography, striking costumes and a memorable villain. This production has none of that. In taking a fairy tale and adding such dark violent elements, the whole narrative struggles with tone. For example, the warm set design never conveys any sense of desolation, yet the savagery of the action (bloody impalements and severed body parts) seems taken from a brutal horror film. On top of that, the "f words" and "b words" just seemed out of place for the film's setting. All things considered, this film may have been better off if it had been adjusted for a PG-13 rating. It's likely that it would have forced some more creativity in the filmmaking process.
Apart from the confused tone, everything just seems so dated. The campiness of the action and dialogue strangely reminded me of the Power Rangers TV franchise. That isn't an insult by itself (I was a Power Rangers fan back in the day), but it's a problem when you consider that was a popular 90s kids show (I refer to the original series of course) and this is a 2013 R-rated action movie. As a result, the campy humour never made me laugh and the cruelty just seemed unnecessarily mean-spirited.
In the end, the Power Rangers comparison would suggest that this may have worked better as a TV series. In fact, it often does feel that way with its open-ended climax and underdeveloped characters. Heck, Famke Jannsen (the main villain) gives her role enough spunky attitude that I could envisage a whole series dedicated to her war with the witch hunters. Unfortunately, I can only judge the 90-minute film that I've been presented with. My final verdict - "Hansel & Gretel: Witch Hunters" is a grotesque, unappealing movie that lacks depth and artistic vision.
Shane Slater at 3:18 PM