MOVIE OF THE WEEK: Becket 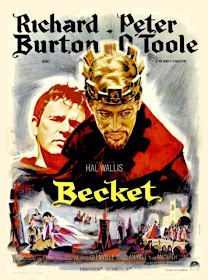 This week's top pick "Becket", is one of the most curious films I've ever seen. On first glance, you would expect a grandiose epic, with its lengthy running time, palatial setting, historical themes and esteemed actors. While some most of this is true, it's really not much of an epic at all. Within minutes of watching this film, its stage roots begin to show.
"Becket" tells the story of King Henry II (Peter O'Toole) and the strained relationship with his best friend Thomas Becket(Richard Burton) over personal differences. Set in the late 1100s, Henry comes into conflict with the church over disagreement over the ability to tax them to fund the military. After the death of the archbishop, Henry seizes the opportunity to exert his influence by appointing Becket as his replacement. Expecting his former drinking partner to comply with his demands, he is shocked to find that his friend takes his job seriously. Becket converts to a saintly protector of the church's sanctity and shuns the king's philandering ways. Thus sets the stage for the core drama of the film.
As we all know, the political context of the separation of church and state is of significant historical importance. That importance is touched on here but mostly, it's sidelined in favour of a rather simple "bromance". Really, bromance may not even be the right word for this scenario. The unraveling of the friendship reveals a situation that seems to hint towards an unrequited love. Much of this is due to O'Toole's fiery performance as Henry. His furious rage and anguish suggests a deep betrayal that extends beyond mere friendship. His seething contempt for his wife and family further establish homoerotic undertones, as he frequently emphasizes his dissatisfication with her. In one altercation, she claims that he would appreciate her more if she were a man, to which he responds "Thank God, madam, He gave you breasts! An asset from which I derived not the slightest benefit." Clearly, if the homoeroticism was intended to be subtle and ambigious, then the film failed in this regard.
Throughout the film, O'Toole's performance is consciously theatrical (to be fair, he also has some brilliant tender moments), as he seems to be projecting to the back of the room. You'd sometimes wish he would use his "inside voice", but it's indeed the most entertaining aspect of the movie. As he lashes out against the world, King Henry dishes out insults like he's on an episode of "Yo Momma". In lieu of actual weapons, he uses words like daggers. Contrast this with Richard Burton's performance (the epitome of uncompromising dignity and refinement) and you get a really impressive acting duo.
The showmanship of O'Toole and Burton in the lead roles are really the film's main attraction (I may even go as far as to say it's film's only noteworthy aspect). The other cast members are absolutely dwarfed by their towering performances, even the suprisingly Oscar-nominated John Gielgud. Furthermore, the visual craftmanship (cinematography, costumes, art direction) doesn't amount to much, as the film would have probably been similarly effective if it was a two-man show in a single room setting.
Without the dynamic performances of its lead actors, "Becket" would be a rather mundane affair(thankfully, it's not). Even with its eloquent dialogue, it's their line delivery that gives the words their potency. In the end, all the drama seems to effectively boil down to a simple lovers' squabble. It may sound reductive, but when the "lovers" are Peter O'Toole and Richard Burton, the fighting is tremendously compelling. They say "hell hath no fury like a woman scorned", but "Becket" goes to great lengths to prove that it equally applies to the other sex.
Shane Slater at 5:25 PM