HIT ME WITH YOUR BEST SHOT: American Graffiti 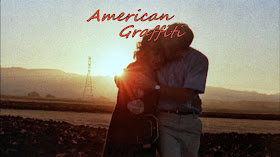 Hit me with your best shot returns this week with George Lucas' 1973 high school drama "American Graffiti". This was my 2nd time viewing this film and I find it quite curious. When one thinks of these end of high school dramas, you immediately expect an atmosphere of nostalgia. As I watch this film however, I feel like any nostalgic feeling is forced by the viewer. In fact, I find it to be a very sad and melancholic film. It doesn't make me want to go back to high school at all.
Despite the difference in tone compared to more rosy high school films, it's still able to strongly capture the essence of the high school experience in the early 1960s. It's such a great curio for that time period, especially in relation to slang terms like "going steady". I sometimes wish the story would delve into the individual characters even more, but the broad themes and iconography provide enough interest. This iconography is the focus of my pick for best shot. 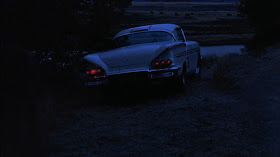 My favourite shot relates to one of the most common themes of high school - teenage love. It may seem like a simple image, but it's so instantly recognizable and meaningful. This "lover's lane" concept has endured for generations and this shot captures a very typical idea of it. You've got the late night setting, the car and the secluded location near to some bushy area. It's intrinsically nostalgic and even more so because of our knowledge of who's inside. The overall film may be slightly depressing(that ending!), but this brief moment (a misfit young man miraculously "scoring" with a hot chick) embodies the hopefulness that we usually associate with our high school days.
Shane Slater at 6:38 AM