A ROTTEN TOMATO: Only God Forgives 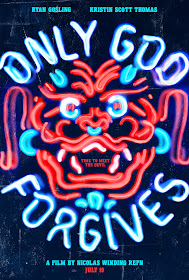 "Only God Forgives" begins with the rape and murder of a young prostitute by an expatriate living in Thailand. In retaliation, the girl's father exacts murderous revenge on him with the aid of a sadistic local cop. In the wake of his death, his mother (Kristin Scott Thomas) implores his brother to take out their own revenge on the cop and his goons. That's all there is to this film - reprehensible people doing reprehensible things.
This is the kind of movie that makes people hate movie snobs. It's comparable to abstract performance art and not very cinematic in the usual sense of the word. It's mostly just violence for the sake of violence. Whereas Tarantino would portray such sadism with a playful "wink", Refn revels in the cruelty of it all. As a result, it becomes oppressive and off-putting. When there isn't bloodshed, it's filled with dull, lifeless posing and distant stares from most of the cast. I love me some Ryan Gosling, but he was laughably bad in this. Mostly mute for no apparent reason, he barely even responds to people when they talk to him. This is not normal human behaviour! The villain (although there really aren't any "good guys" in the film) is also a strange character. There's a scene with his daughter that seems to suggest that he's a compassionate person, but his actions speak otherwise.
Honestly, if it weren't for Kristin Scott Thomas' fierce performance, I would think that the film was set in some kind of undead zombie universe. You truly miss her when she's not on screen. She almost saves the film, but everyone else is way too sedate for her performance to have any meaningful effect.
Overall, I recognize the film's impressive visual style, with its impeccable set design and lighting. There's even a sick beauty to the creative ways in which the characters choose to inflict pain and death. Also, the film has an interesting aural quality, as can be expected from a Nicolas Winding Refn film. Unfortunately, these strong aspects are not enough to be satisfactory for a full feature-length film.
Shane Slater at 7:24 PM