HIT ME WITH YOUR BEST SHOT: Double Indemnity 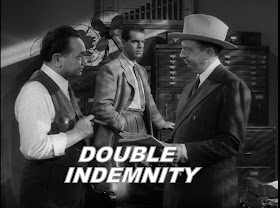 This week on Hit me with your shot we look at a classic film noir - "Double Indemnity". Written and directed by the storytelling genius Billy Wilder, it's an engaging story of love, murder and deceit. This was my second time watching it and it held up very well, especially the deservedly Oscar-nominated performance by Barbara Stanwyck. As the slinky housewife (Phyllis Dietrichson) who is up to no good, she is the film's main attraction for me, so I decided to pick a shot that focused on her character. 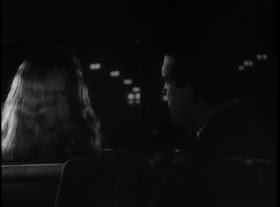 My favourite shot comes from a scene just after Dietrichson and her co-conspirator Walter Neff (played by Fred MacMurray) have just committed the crime. It's a scene that shows just how cold-hearted and devious she is. I was amazed by how unflinching and steadfast she was in her quest. In fact, Neff is impressed too. He's all fidgety in the getaway car, but she remains focused. We only see the back of her head, but the stillness speaks volumes. She's got her eyes on the prize. As he notes...

"I was afraid she might go to pieces a little, now that we had done it. But she was perfect. No nerves. Not a tear, not even a blink of the eyes."


Talk about a femme fatale!
Shane Slater at 5:20 PM