HIT ME WITH YOUR BEST SHOT: Jackie Brown 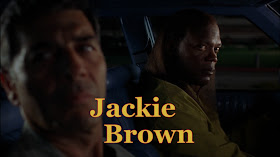 We're back again for another edition of Hit me with your best shot, as we delve into some Tarantino with his 1997 film "Jackie Brown". To be honest, this proved to be quite a challenge. This is perhaps one of Tarantino's least visually dynamic works and as such, it was hard to pin down a striking image. That's not to say it's a poorly made film though. On the contrary, it has many of the elements that we have come to love from this director. Namely, there are the interesting characters, memorable dialogue, clever use of music and his dark sense of humour. In selecting my shot, I focused on that first element. 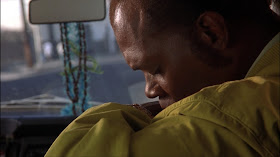 My favourite shot comes from the tail end of the film when Ordell Robbie (Samuel L. Jackson) finds out that his plans have fallen apart. He takes a minute to gather his thoughts and we're not sure if he is dejected or devising a plan B. Soon he realizes...

That basically sums up the film right there. Practically every other character's fate is directly controlled by her. It's a fantastic performance from Pam Grier as she holds her own among other strong female characters in the Tarantino universe (Shosanna, The Bride etc.). I love how the script makes sure to establish her motives (after 20 years as a flight attendant, she still only makes $16,000 a year, with retirement benefits that ain't worth a damn) and the tricky predicament she's in. It makes her eventual success even more impactful. With $500,000 on the line and a dangerous collaborator (Robbie) as a constant threat, it would be reasonable to expect her to make foolish desperate decisions. As the various supporting characters soon find out though, they've underestimated this woman. On this 2nd viewing, I was even more impressed by how well she set up her money exchange. What a great climax, which is all due to the awesomeness of its leading lady.
Shane Slater at 7:39 AM