HIT ME WITH YOUR BEST SHOT: Forbidden Games 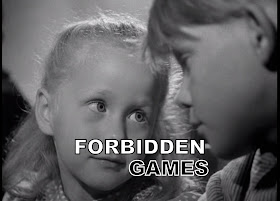 For this week's Hit me with your best shot, we looked at one of the earliest Oscar honorees for Best Foreign Language Film - "Forbidden Games". I had actually never heard of the film before and it wasn't exactly what I expected. It was quite good, but it was a lot more sad than I imagined it. Set during World War II, the threat of death seems to be omnipresent. The film focuses on 2 children (Paulette and Michel) from different social backgrounds who unfortunately have to deal with death at their young age. It's certainly not pleasant, as Paulette becomes abruptly orphaned in the beginning of the film after a Nazi air strike. In addition, her beloved dog Jock is also killed. Likewise, Michel suffers through the death of a loved one during the course of the film. With death being such a powerful theme, my favourite shot inevitably related to this stage of life. 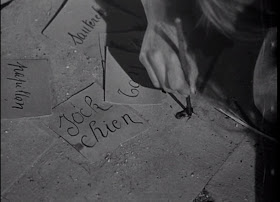 Despite all the sunshine and cuteness that the children bring, this is a deceptively grim and morbid film. Both children have been forced to deal with death and their coping method seems quite peculiar. Rather than hiding from it, they seem to have embraced the concept of mortality. For example, they collect crosses and secretly plan a cemetery to bury various dead creatures.

My favourite shot comes from a scene that expresses this ability to accept death. In this scene, the kids have prepared makeshift grave markers for a variety of dead animals (including her dog Jock). Soon enough a cockroach comes crawling by and Michel decides to kill it with a pen. This really horrified me as it showed such agency on his part. I mean, I personally prefer to be more detached from such a vile creature when I squish it (apologies to any cockroach lovers out there). Using my hands just feels too up close and personal. It shocks Paulette too, as she asks him not to kill it. However, he explains...

This just goes to show the curiousity of children and their quest to understand our mysterious world. Their recent experiences with death are closely linked to the consequences of war. Hence, he finds a way to blame the war itself. You really can't blame them as it must be incredibly overwhelming to have to deal with the brutality of war at such a young age. The death of a loved one is tough for anyone and this film does a good job in showing how it affects little children in particular.
Shane Slater at 7:25 AM