MOVIE OF THE WEEK: Ghostbusters 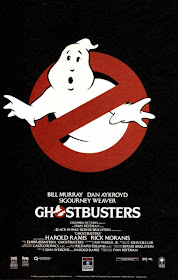 If there's somethin' strange in your neighbourhood, who you gonna call? Ghostbusters! When the first lines of that iconic theme song come on, that wave of nostalgia hits you and you know you're in good hands. Of course, I'm referring to the 1984 comedy "Ghostbusters", a film I had seen ages ago but had mostly forgotten. In case you didn't know, "Ghostbusters" tells the story of a trio of parapsychology professors who band together to eliminate the threat of paranormal activity in New York City. If you don't recognize the term "parapsychology", don't worry. It's part of the film's off-kilter sense of humour. Basically, a bunch of Joe Schmoes (albeit self-professed "scientists") have dedicated their lives to studying ghosts and get a dream opportunity when the city comes under attack. To remedy the situation, they provide a ghost removal service, calling themselves "The Ghostbusters". On the page it sounds like a dark, terrifying situation, but the film is defiantly not a horror movie. Despite the discomfiting design of the ghosts, their presence is never truly threatening for the viewer. While the film portrays these villains with a comedic tone, it somehow never truly risks becoming a B-movie. That's the beauty of the film and the reason why it has become so well-regarded over time.
There are many facets to this film that make it so entertaining and respectable. Primarily, the film makes use of a committed cast that fully respects their characters. Even in the most absurd situations, they are all acting from a place of honesty and truth. As the leader of The Ghostbusters, Bill Murray is in fine form, delivering endless wit with his deadpan style. The screenplay is filled with clever puns and situational humour and he just eats it up. Also delightful in a smaller role is Rick Moranis, stealing scenes as the diminutive geek. His conversations with the female lead (played by Sigourney Weaver) are especially amusing as he employs his trademark endearing charisma. Weaver is outstanding herself as she easily takes on a double character of sorts. She clearly had a lot of fun in the role and it really rubs off on the audience. In addition to these outstanding performances, the rest of the ensemble is also immensely enjoyable.
Of course, the film features some other characters in the form of various supernatural beings. With the use of special effects, the film easily integrates them into the environment. Although the techniques seem outdated now (particular scenes seemed derivative of "The Exorcist"), the unrefined quality in itself adds a bit of humour to the proceedings. As I mentioned earlier, these monsters aren't really intended to scare, with much of their aggression relating to harmless explosions of slime or marshmallows! As a result, the effects-heavy scenes may come across a bit too camp for newer audiences (admittedly, even I found my self rolling my eyes at times), but they are certainly not dull.
In the end, "Ghostbusters" is all about having a good time at the movies. Even more importantly, it leaves a lasting impression on the viewer with the iconic uniform, vehicle (the Ecto-1), monster (Stay Puft Marshmallow Man) and a bona fide hit song. I am confident that "Ghostbusters" will stand the test of time and will delight audiences for years to come.