HIT ME WITH YOUR BEST SHOT: Singin' In The Rain 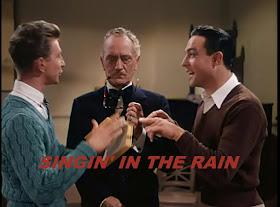 This week on Hit me with your best shot, we perused one of the most enjoyable films ever made – "Singing in the Rain". This joyful musical never fails to delight with its memorable songs, hilarious performances, colorful costumes and superb dancing (!!). For this assignment, I narrowed it down to 2 choices exploring different themes. In the end, I chose an image that stands out from the rest of the film. 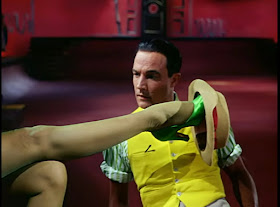 My favourite shot comes from Don Lockwood’s (Gene Kelly) mental visualization of the "Broadway Melody" number. This entire scene stood out because it just seems so out of place with the rest of the film. The neon lights and multi-colored costumes (just look at Kelly’s outfit in the shot, there is even a hidden pink tie too!) are in contrast to the slightly more reserved tone of the rest of the film. I wouldn’t remove the scene though, as it’s a spectacular piece. During this scene, the song and dance is halted for a moment by...a sexy pair of legs. In the entire film, this is the first and only moment of sensuality. The film has a lot of romance and Lockwood certainly does get a little seductive when he meets Kathy (Debbie Reynolds) for the first time, but the suggestion of sex is never this overt. The shot is almost reminiscent of Claudette Colbert’s famous hitchhiking scene in "It Happened One Night". Like that instance, Lockwood is stopped in his tracks. His bright smile is gone and the whole atmosphere changes. The music slows down to a more sultry jazz style, ideal for the red "after-hours" color scheme of the room. The legs catch his eyes first and then he follows them all the way up to her face. She’s got him in the palm of her hands. Oh, the power of a beautiful woman.
If you think I’m exaggerating the sexuality, keep watching the scene. This Velma Kelly lookalike proceeds to spread her legs further, practically doing "the number 17 – the spread eagle".
Shane Slater at 7:23 AM