HIT ME WITH YOUR BEST SHOT: Sherlock Jr. 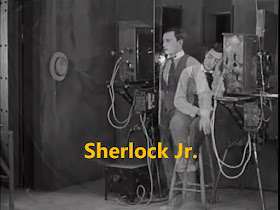 Another edition of Hit me with your best shot brings us "Sherlock Jr.", directed by Buster Keaton. This amusing film features all the funny visual gags you would expect from a silent film. Although it didn't completely convert me into a silent film enthusiast, I could definitely see its merits. I was particularly struck by the Bond-like, blockbuster elements of the film. Although the film is low-key by today's standards, it includes explosions, chase scenes, stunts, cool gadgets, a hot chick and even some visual effects! Hence, my favourite shot highlights one of these elements. 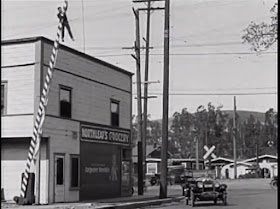 My favourite shot comes from a chase scene where Buster Keaton leaps from the top of a building into the crook's car. Buster Keaton did all his own stunts and I was quite impressed with this one.
Shane Slater at 7:30 AM