This week's feature on Oldie Goldies is the classic musical - "Singin' In The Rain". This film really set the gold standard for musicals with a great script, amazing singing and dancing and a charismatic cast (especially Gene Kelly, who is the epitome of smooth). Surprisingly, the film was only nominated for 2 Oscars - Best Supporting Actress and Best Original Score.

What do they think I am, dumb or something? Why, I make more money than Calvin Coolidge! Put together! 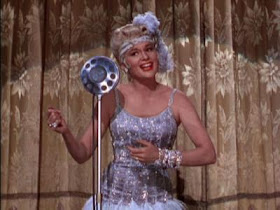