"You think I'm licked. You all think I'm licked. Well, I'm not licked. And I'm going to stay right here and fight for this lost cause. Even if this room gets filled with lies like these, and the Taylors and all their armies come marching into this place." 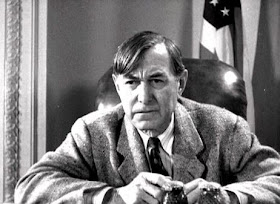 President of the Senate (Harry Carey)

Senator Joseph Paine (Claude Raines)
Did you know?
In the studio, to ensure authenticity, an elaborate set was created, consisting of Senate committee rooms, cloak rooms, hotel suites as well as specific Washington, DC monuments, all based on a trip Capra and his crew made to the capital.
Shane Slater at 5:47 PM