Here’s another great classic for you on Oldie Goldies, this week is “The Wizard of Oz”. The film is really remarkable for its stunning cinematography, memorable characters and music, and its elaborate sets and costumes. The film got Oscar nods for these technical categories (Best Art Direction, Best Cinematography, Best Visual Effects) and won for Best Original Score and Best Original Song. In addition, the film was also nominated for the big one - Best Picture.

"Toto, I've got a feeling we're not in Kansas anymore." The Wizard of Oz (Frank Morgan)

The Wicked Witch Of The West (Margaret Hamilton)
Classic Costumes 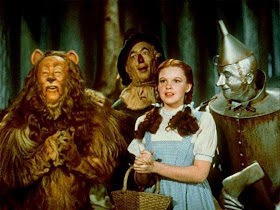 Classic Song
"Over The Rainbow"
Did you know?
An old urban legend claimed that, in the film, a Munchkin could be seen committing suicide (hanging by the neck from behind a prop tree and swinging back and forth) far away (left) in the background, while the Tin Man, Dorothy and the Scarecrow are singing We're Off to See the Wizard and skipping down the yellow brick road into the distance.
Shane Slater at 12:24 PM