MOVIE OF THE WEEK: Boyz N The Hood 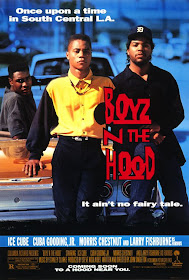 "Boyz n the Hood" is an oustanding film that shows the struggles of life in the ghetto. It's a truly heartfelt film that really helps you understand the various characters, who are all influenced by their circumstances. This "personal" effect is the result of a great ensemble cast. It was really refreshing to see a positive black father figure, unlike films like "For Colored Girls" with their blanket portrayals of black men in a negative light.
Shane Slater at 4:49 PM