MOVIE OF THE WEEK: Dances With Wolves

This is really one of the classics. You have to be patient though, because it's quite long and slow-paced. The pay-off is worth it though. Great study into such an important juncture in American History. Perhaps this is stale news to you, as it seems I am the only person who hasn't seen this.
Shane Slater at 9:26 AM No comments:

What a weird film. Totally pointless in my opinion. Bleh.
Shane Slater at 11:07 AM 2 comments:

I know I've been harping on about "The Girl With The Dragon Tattoo" lately, but it's a hot topic right now. Word on the street is that the star of the Swedish version of the film (Noomi Rapace) is trying to get in on the Best Actress race. Her agent is comparing her to Marion Cotillard who won Best Actress for her performance in a foreign film. Considering her meteoric rise since then, it's easy to see why this is a big deal for Rapace. UPDATE: I saw the Swedish version of the film on the plane and it is good, but nothing memorable in my opinion. Safe to say Rapace will not be in the game.
Shane Slater at 7:11 AM No comments:

"The Girl With The Dragon Tattoo" is...Rooney Mara

It has just been announced that the title role in David Fincher's upcoming film will be Rooney Mara. She is clearly a personal favourite of Fincher, who has cast her in the highly-anticipated "Facebook movie" titled "The Social Network". Shooting for "The Girl With The Dragon Tattoo" begins in September.
Shane Slater at 10:42 PM No comments:

Who is "The Girl With The Dragon Tattoo"? 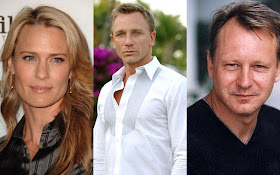 As the search continues for the actress who will play the title role, some of the other cast is already being filled up. This highly anticipated film is relevant to me as I am currently reading this book and I must say, the cast(in addition to accomplished director David Fincher) has me very excited so far! It has just been revealed that Robin Wright (State of Play) will play Erika Berger, Daniel Craig (Casino Royale) will play Mikael Blomkvist, while Stellan Skarsgard will take on Martin Vanger (Good Will Hunting). If it's as good as the book and the original film(from what I've heard), then we are in for a treat!
Shane Slater at 9:36 AM 2 comments:

What a great movie, a simple story portrayed beautifully. An outstanding performance from Leonardo DiCaprio (and at such a young age too! If you haven't seen this yet, go rent it now!
Shane Slater at 9:24 AM No comments:

A ROTTEN TOMATO: The White Ribbon I started falling asleep 5 minutes into this movie! Ok, maybe I was a bit tired from a long night, but I also think it was just really boring. Maybe I should watch it again for a second opinion, but I don't think I can put myself through that torture again. Quite overrated in my humble opinion.
Shane Slater at 10:51 AM 1 comment:

MOVIE OF THE WEEK/OSCAR WATCH: Inception Yep, I've been "Incepted". What a brilliant film. It really got inside me and I don't know if I liked the feeling. I felt like it took my mind to a scary place that it didn't want to go. After the movie was over, I felt slightly tired after the rollercoaster that this film took me on. It was like a jolt back to reality when I left the theatre. This is definitely a prime pick for the Oscars. Brilliant production from Christopher Nolan yet again. It takes great imagination and vision to concieve a film like this. For me, the backbone of this film were the performances of the cast. Leo, Marion Cotillard and Ellen Page in particular were impeccable. Leo has done remarkable work this year (with his perfomance in Shutter Island) and is certainly due some recognition. To quote another blogger, Cotillard was "alive" in the film. I totally agree, she was absolutely radiant and some of her scenes were just so heartbreaking. I expect acting nominations for both Cotillard and DiCaprio, Page will be a hard one to sell, but her performance was equally outstanding. The score was also excellent (it's by Hans Zimmer for crying out loud!), playing like a constant pulse for the film. So in Oscar terms, this should score in Acting, Directing, Score, Editing, Cinematography and some of the other technical categories. Somehow, I'm not too convinced that the screenplay will be a major contender, but it was also quite good.
Shane Slater at 8:12 AM No comments:
‹
›
Home
View web version